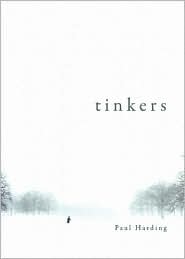 A late-spring storm capped the last daffodils and the first tulips with dollops of snow, which melted when the sun came back out. The snow seemed to have a bracing effect on the flowers; their roots drank the cold melt, their stalks straightened from the chilly drink; their petals, supple and hale, were spared the brittle coating of a true freeze. The afternoon became warm. and with the warmth the first bees appeared, and each little bee settled in the a yellow cup and took suck like a newborn. Howard stopped Prince Edward, even though he was behind on his rounds, and gave the mule a carrot and stepped into the field full of flowers and bees, who seemed not to mind his presence in the least, who seemed, in fact, in their spring thrall, to be unaware of his presence at all.

This remarkable first novel is a testament to the power of observation. Tinkers is an examination of the relationships between fathers and sons. George Washington Crosby, who repairs clocks for a living,  is on his deathbed. As his life begins slowing down just as his clocks begin to lose time and eventually stop, Crosby returns to his childhood. Memories of his father, a traveling salesman and epileptic, begin to fill his mind.   Crosby’s father may not have been the most lucrative man, but he had an amazing sense of the world around him and his relationship to nature is almost ecstatic. The reader can work through the layers of meaning throughout the book just as George Washington Crosby works through the delicate workings of his clocks. While Harding’s novel is gorgeously written, his poignant attempts at understanding characters that are hard to pin down makes this novel a true work of art.

Paul Harding will be reading from and signing Tinkers at the Peabody Institute Library, Danvers on Wednesday, February 4th from 7-9pm