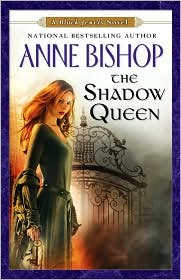 Dena Nehele is a land decimated by its past. Once it was ruled by corrupt Queens who were wiped out when the land was cleansed of tainted Blood. Now, only one hundred Warlord Princes stand-without a leader and without hope.

Theran Grayhaven is the last of his line, desperate to find the key that reveals a treasure great enough to restore Dena Nehele. But first he needs to find a Queen who remembers the Blood’s code of honor and lives by the Old Ways. The woman chosen to rule Dena Nehele, Lady Cassidy, is not beautiful and believes she is not strong. But she may be the only one able to convince bitter men to serve once again.

You’ve heard of an unreliable narrator, right? Well, I’m presenting myself to you, in this case, as an unreliable reviewer. Unreliable because I am absolutely biased in favor of Anne Bishop and her Black Jewels books.

Back in 2007, I reviewed the original trilogy, and then the following year I typed up a few thoughts on Tangled Webs. I expressed my love, admiration, and admitted to a growing obsession with the world the ‘Blood’ inhabited. This review will follow in those others’ footsteps.

In The Shadow Queen the characters – and the reader – are confronted with life after the cleansing, which purged corruption from the land. As a result, the novel focuses on coming to terms with the ghosts that linger, on family, and on the dangers and rewards of laying down roots in a place where the people have been broken by cruelty.

Thanks to dynamic characters and excellently crafted world-building, this installment in the Black Jewels saga is at times heartbreaking, hopeful, life affirming, and utterly absorbing.

It’s best to begin with the original trilogy because The Shadow Queen presents many events that happened in the first three books, and to fully appreciate the novel that’s really the only way to go. But I think I can safely promise you that, if you enjoy dark fantasy, you will read Daughter of the Blood and you won’t look back.