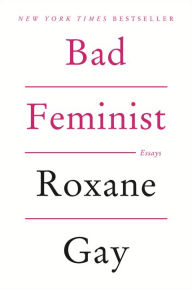 I don’t remember when “feminist” became such a buzz word in the pop culture strata during the last 3-5 years, but I do know that I started noticing it in my vocabulary a lot just last year. I may not have all my beliefs in order or all my thoughts organized – which sort of makes the idea of embracing the possibility that there really are no “good” feminists out there, that we’re all “bad” in some way, kind of perfect – but I’m really in love with anyone who at least tries to, if not fix their own mess, then realize they are incapable of such clean-up. They own that mess, they curate it, and sort it, and protect it. Roxane Gay is one of those people.

Although Gay’s essays in Bad Feminist were too disjointed for my liking*, they were poignant and insightful and raw and questioning. She wrote about her discovery of competitive scrabble with the same passion as her conflicted feelings on misogynistic rap lyrics (especially Robin Thicke’s “Blurred Lines” #ugh #gross). She gave me irrefutable proof on the mess that is Fifty Shades of Grey (god bless you for reading that pos, Roxane) and then delved even deeper into how prevalent rape and female violence are in literature.

Basically, there was an essay for everyone who either calls him or herself a feminist or is just interested in the concept. Gay took what could have been very personal diary entries on race, gender, sexuality, problematic faves, and politics and put all that mess into the world and fully explored what being a feminist means to her – and how, in both little and in big ways, she goes against that definition. Because, ultimately, what makes a feminist a feminist? What does it mean if you consider yourself a feminist and enjoy songs (or movies or celebrities) that go against the very ideals you hold dear? Is being feminist a be-all end-all philosophy or something more fluid and inclusive? If there is no singular definition for feminism, then how does one define it???

I don’t know, but Gay doesn’t know either. And maybe that’s the whole point of her collection of essays, to “try to keep…feminism simple.” She says, “I know feminism is complex and evolving and flawed. I know feminism will not and cannot fix everything… [but] feminism is a choice, and if a woman does not want to be a feminist, that is her right, but it is still my responsibility to fight for her rights.” Damn straight.

*There was some semblance of structure by way of loosely curated sections, but the essays in each section overlapped with or referenced earlier points (without actually referencing earlier essays) that I couldn’t help but think there would have been a better, more flow-y way of pulling everything together.