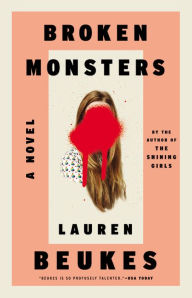 Detective Gabriella Versado has seen a lot of bodies, but this one is unique even by Detroit’s standards: half-boy, half-deer, somehow fused. The cops nickname him “Bambi,” but as stranger and more disturbing bodies are discovered, how can the city hold on to a reality that is already tearing at its seams?

If you’re Detective Versado’s over-achieving teenage daughter Layla, you commence a dangerous flirtation with a potential predator online. If you are the disgraced journalist Jonno, you do whatever it takes to investigate what may become the most heinous crime story in memory. If you’re Thomas Keen, you’ll do what you can to keep clean, keep your head down, and try to help the broken and possibly visionary artist obsessed with setting loose The Dream, tearing reality, assembling the city anew.

It’s odd for me to read two works of narrative fiction back-to-back – if I don’t alternate novels with nonfiction, it can become too easy to just read made-up stories and forget all the rest. But reading Station Eleven by Emily St. John Mandel only to follow up with Lauren Beukes’s Broken Monsters seemed like a no-brainer: although both novels peppered microcosmic bursts throughout a macro narrative, their similarities kind of stopped there. Where Station Eleven cornered speculative fiction with a flu virus turned pandemic, Broken Monsters turned its spotlight on a probable schizophrenic serial killer roaming around the city of Detroit in real time.

And, yes, both hooked me with narratives, and kept me reading past bedtime, and fed me answers just as quickly as they kept me asking questions. Each new chapter was just so freaking good that it left a weird feeling in the literary part of my gut – I really wanted to believe that all chapters would be so gracefully composed… but what if they weren’t? What if the high of reading a perfectly proposed, interconnected narrative was just this one chapter? What if the narrative peaked too soon and left me feeling both disappointed in the story and also annoyed with myself for setting my hopes too high? (What if? What if?!)

If you read my review of Station Eleven, then you know that Mandel’s novel did not disappoint; it was so very not disappointing that I found myself brimming over with positivity – and just plain gross affection – about how wonderfully magnificent a single, 300-page volume about a space station and Shakespeare can be. (It just makes me feel things, okay? Like, why is literature art? And how can artistic forms of expression explain the human condition? And maybe what is the meaning of the universe? And also what does it mean to be human?)

Which brings me to Broken Monsters and how this novel had so much going for it and also how its ending left a gritty paste in my mouth. For example:

And so you’re reading about this awful murder – written in grisly detail – and you get to follow the development of the narrative along with three vastly different characters and everything is amazing and you’re, like, yeah, Lauren Beukes! Get it, girl! Make me question my own moral values as I revel in the disgusting gore that is at the heart of your novel. Strip away my conscience. Slather me in filth. BECAUSE I AM DIGGING THIS SO HARD RIGHT NOW.

And then the last couple of chapters happen and you’re like wait. Hold up. WTF is going on. Is this real life. How is this happening. I DON’T UNDERSTAND.

And, okay, I get that maybe this was just me, because both Rebecca Schinsky and Amanda Diehl liken the novel to season one of HBO’s True Detective (and I LOVED season one of True Detective). But the rest of the novel was strictly realistic fiction. (Hella’ creepy but still within the vein of reality.) And then the ending comes? And it feels like a fever dream? And not humanly possible? It just didn’t flow with the rest of the story in a way that felt satisfying or coherent. Beukes didn’t allow us to marinate in that headspace for enough time so that I could buy that what was happening was truly happening. (Like in, say, American Psycho.)

And so it kind of sort of ruined the preceding 300 pages of amazingly constructed characters, plot, and narrative drive. If Beukes wanted to write a trippy “wtf is going on is what’s happening really happening” kind of novel, she should have done it throughout – ESPECIALLY because she already puts us in the mind of the novel’s killer. And never once did I question the reality of the story when I was reading his parts; I only questioned HIS reality – and that is an entirely different thing.