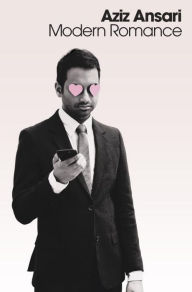 At some point, every one of us embarks on a journey to find love. We meet people, get into and out of relationships, all with the hope of finding someone with whom we share a deep connection. This seems standard now, but it’s wildly different from what people did even just decades ago. Single people today have more romantic options than at any point in human history. With technology, our abilities to connect with and sort through these options are staggering. So why are so many people frustrated?

To solve this problem, Aziz Ansari teamed up with NYU sociologist Eric Klinenberg and designed a massive research project, including hundreds of interviews and focus groups. They analyzed behavioral data and surveys, created their own online research forum on Reddit, and enlisted the world’s leading social scientists to produce a result unlike any social science or humor book we’ve seen

In Modern Romance, Ansari combines his irreverent humor with cutting-edge social science to give us an unforgettable tour of our new romantic world.

For a stand-up comedian, writing any type of full-length work is ambitious. For Aziz Ansari – perhaps best known as either a stand-up comedian with his own Netflix special or as Tom Haverford on Parks and Recreation (and who, might I add, received a reported three and a half million dollar advance for this work) – something like Modern
Romance should be lauded as the next great debut-memoir by a well-known and respected comedian (a la Yes Please, Bossypants, or Is Everyone Hanging Out Without Me? (And Other Concerns). Except it isn’t a memoir, and you can’t force it to be one just by wishing. (Trust me, I tried.) I think Vanity Fair sums up the book pretty well: “It’s an unexpectedly serious work about the challenges and pitfalls of looking for love in the Digital Age via Match.com, OkCupid, Tinder, Twitter, Facebook — the whole techno shebang.”

Which, okay, is still pretty awesome and interesting and what-have-you. But an interesting pop-science look at romance in the twenty-teens is still not a hilarious memoir written by a pretty funny stand-up comedian whose voice is so distinct I can hear his inflections just by reading. I think that if a reader were to go into this book absolutely knowing that he or she would not be getting Ansari’s stand-up in written form, and if said reader were interested in how teens through baby boomers (and maybe even octogenarians) find love since the invention of the smartphone, then, yeah, go for it. Modern Romance is for you.

But it wasn’t for me (even though I really, really wished it were).

Sidenote: I’ve heard* great things about the audiobook, read by Ansari. The only real interaction I’ve had with him is through talk-show interviews, GIFs of Haverford on Tumblr, and an episode of This American Life – but hearing Ansari’s voice act out the words that comprise Modern Romance made the text come alive in a way that, unfortunately, the words themselves lacked.