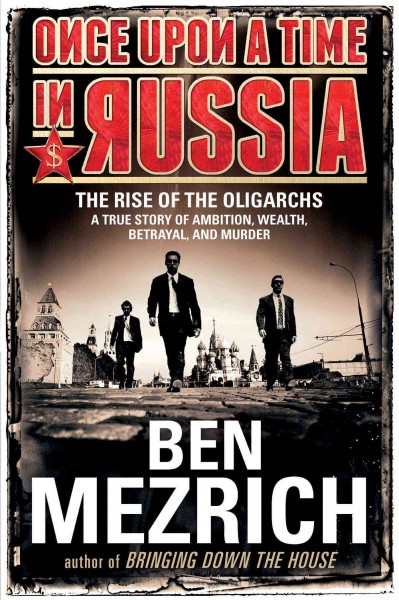 Mezrich’s Once Upon a Time in Russia: The Rise of the Oligarchs is a hard book to categorize, which says to my mind that it will appeal to a wide variety of readers. It could be read as a history of Russia in the 1990s and early 2000s; it could be read as true crime literature; it also has the machinations of big business, political intrigues and the shadow of espionage. All of this is set against the tumultuous background of Russia after the collapse of Communism.

The story follows the rise of Boris Berezovsky from a car salesman to one of Yeltsin’s inner circle. Berezovsky was one of the individuals, called oligarchs, to make it rich after the collapse of the Soviet Union. Berezovsky, in his rise to power, simultaneously inhabits a world of yachts, private planes, assassins and shady deals with the Russian mob. As you read, you watch this morally ambiguous character build his empire through complex business deals to privatize and monopolize formally state owned industries and through deals with the political elites to prop up the ailing Boris Yeltsin and eventually help put Vladamir Putin into power.

At the same time Berezovsky comes across as a self-destructive figure who can’t keep his mouth shut even when it is in his best interest to do so. He repeatedly runs afoul of Putin, when it would have been relatively easy to fly under his radar. This quality also drags down a lot of his associates. A story that runs parallel to Berezovsky is that of Alexander Litvinenko, an agent in the Federal Security Service, who moonlights working for Berezovsky. Litvinenko is attracted to the power and connections of Berezovsky, but at the same time gets caught up in his schemes.

My favorite character, though, was Badri Patarkatsishvili, Berezovsky’s shadowy Georgian business partner. Besides having an awesome name, Patarkatsishvili is this almost Cheshire Cat like character. He is always present, making wry comments on everything from Yeltsin’s health to suitcases full of cash being carried through the doors of their headquarters. At the same time it is always implied that he is Berezovsky’s enforcer and just his presence in the room intimidates people. However, in the end, he is Berezovsky’s only friend and the only voice of reason in his life trying to curb the Oligarch’s excesses.

This is a very fast-paced book. Although non-fiction, it reads like a crime novel, with twists and turns around every corner. At the same time the story will appeal to those, myself included, who grew up during this time. I enjoyed getting the inside scoop on events that I watched on tv as a teenager.