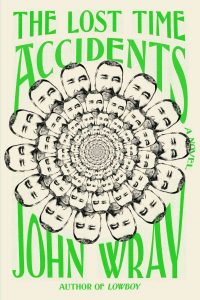 Haunted by a failed love affair and the darkest of family secrets, Waldemar ‘Waldy’ Tolliver wakes one morning to discover that he has been exiled from the flow of time. The world continues to turn, and Waldy is desperate to find his way back – a journey that forces him to reckon not only with the betrayal at the heart of his doomed romance but also the legacy of his great-grandfather&#39;s fatal pursuit of the hidden nature of time itself. Part madcap adventure, part harrowing family drama, part scientific mystery – and never less than wildly entertaining – The Lost Time Accidents is a bold and epic saga set against the greatest upheavals of the twentieth century.

I tried to like The Lost Time Accidents, okay. I really, really tried. Look at that cool cover! That wavy green font!! The weird plot I don’t quite understand!!! But the thing about John Wray’s novel is that it is narrated by a whiny, pretentious a-hole who is a) pining after a woman who doesn’t love him and b) buoyed by the belief that he is the only one who can fix his family’s legacy.

My gut told me to give up by, like, page 100, but I convinced myself to keep going… and let me tell you, that was a stupid decision. (Always trust your gut.) The book interweaves two narratives: Chosen One™ Waldemar Tolliver exiled from time in his aunts’ claustrophobic, hoardish New York apartment and the story of the Toula/Tolliver family, conveniently narrated by Waldemar through the letters he writes to a Mrs. Haven. The plots finally converge at the end – when beginning-of- book-Waldemar makes an appearance in end-of- book-Waldemar’s final letter – but everything feels disjointed as a result. I kept wondering if I was looking at this alternate twentieth century as Waldemar’s great-grandfather Ottokar or (in the one bright spot in Wray’s otherwise dreary escapade) as his grandfather Kaspar Toula; as a young, pre-Mrs. Haven Waldemar, digesting and narrating his family’s history after the fact; or as exiled-from-time Waldemar, explaining both the events AND their reflection as he writes to Mrs. Haven.

I mean, I didn’t even fully understand what a lost time accident was until it’s explicitly explained in the text – some 90% of the way through. This is on top of the book being a perfect DNF* candidate AND having a main character who grates on my nerves – like, a straight-up STFU kind of privileged elitist who will not accept that a woman does not (and probably never did) love him and so writes his emotions as irrefutable fact so that she will “better understand” how much he has suffered and is thus entitled to a second chance. It’s called ghosting, Waldemar, and your failure to accept that Mrs. Haven straight up ghosted out of your not-so clandestine affair means she’s not interested. Going back to her husband means she’s over it. LEAVING THE COUNTRY WITHOUT TELLING YOU MEANS SHE’S NOT INTO YOU. MOVE ON.

(Side note: let’s all just conveniently overlook the fact that Waldemar exclusively refers to Mrs. Haven as Mrs. Haven because I do not have the energy to explain why a female character should not be solely identified through her marriage to a man. Okay? Okay.)

I have seen reviews of The Lost Time Accidents praising its brilliance, but I’m at a lost as to why there was such a disconnect between what those reviewers got out of the novel and what I came away with. As such, it’s hard for me to say “this book sucked, ergo, don’t read it” because I seem to be in the minority. Maybe, after slogging through a less-than- stellar City on Fire, I’m just at my cap of Novels Featuring White Dudes Saving the Day Written by Upper Middle Class White Dudes? (You know who isn’t? People lovingthis book.) By all means, read The Lost Time Accidents if so inclined. You can find me enjoying something else entirely.