I have this fear (some might say pathological fear) of going somewhere and not having something to read. With libraries, bookstores, and of course ebooks that really isn’t a problem. However, I went on vacation last week, and that brought about a further problem I have: over packing books. Picture me standing in my bedroom with a rollerboard open full of shirts and shorts and all the accoutrements of vacation travel. I’m standing with my back to the rollerboard staring, with a look of concern on my face, at my bookshelves. What should I bring with me? Spy novel? Of course, but what if I don’t feel like a spy novel? What if I feel like non-fiction? Ok, some history. What history? And on and on and on. Books go into the rollerboard. Some come out but mostly it’s in. What eventually happens is every spare space of the rollerboard – and most of the accompanying backpack – are stuffed full of books I won’t have time to read but must have just in case I want/need to read them. Hopefully I don’t remember any of the magazines I have laying around or I could spend the whole vacation just packing. I’ve often thought I should have a car with the backseat removed and replaced by one of those bookshelves you see on sailing yachts, with the brass bar to hold the books in place. Now that I’ve made you listen to my particular psychosis, have a look at some of the books I took with me but didn’t read on my trip to Vermont and New Hampshire last week: 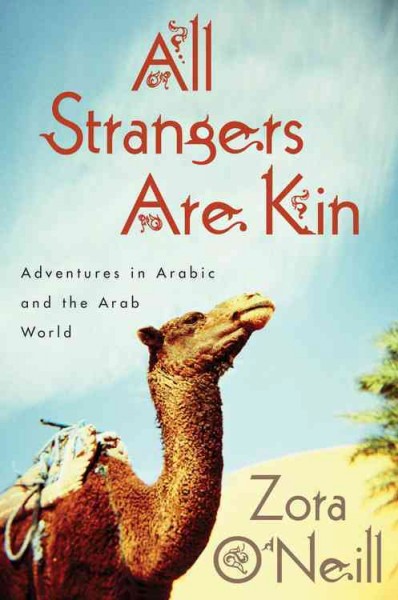 All Strangers Are Kin: Adventures in Arabic and the Arab World by Zora O’Neill.
I have a fascination with the oddities of other languages so I thought this would be both an interesting examination of the Arabic language and the experiences of a non-native speaker trying to use it.

“They say that Arabic takes seven years to learn and a lifetime to master. O’Neill had put in her time. Steeped in grammar tomes and outdated textbooks, she faced an increasing certainty that she was not only failing to master Arabic, but also driving herself crazy. She took a decade-long hiatus, but couldn’t shake her fascination with the language or the cultures it had opened up to her. So she decided to jump back in—this time with a new approach.”

Swords Around the Throne (Twilight of Empire #2) Ian Ross. [coming soon to the 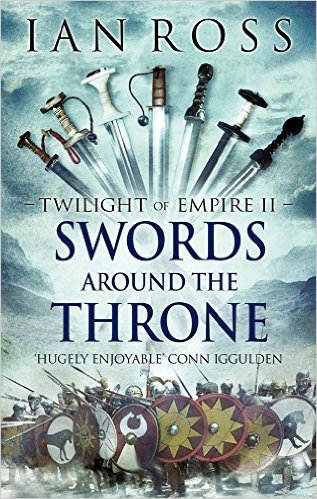 library]
I loved the “you are there” quality of Ross’s first book in this series, War at the Edge of the World, so when I saw the second one on the shelf I had to take it.

“The second novel in this epic series, set at the end of the Roman Empire, sees a treasonous conspiracy threatening to bring down the Emperor Constantine. Only one man’s courage stands between the rebels and victory. Rewarded for saving the emperor’s life in battle, centurion Aurelius Castus is promoted to the Corps of Protectores, the elite imperial bodyguard, the swords around the throne. But he soon discovers the court to be just as hazardous as the battlefield; behind the gilded facade of empire, there are spiraling plots, murderous betrayals and dangerous seductions. And one relentless enemy.” 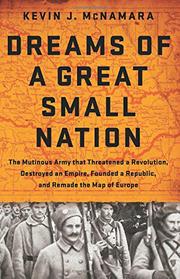 Dreams of a Great Small Nation: The Mutinous Army that Threatened a Revolution, Destroyed an Empire, Founded a Republic, and Remade the Map of Europe Kevin J. McNamara. [coming soon to the library]
Somewhere I don’t remember, I read a passing reference to the exploits of the Czecho-Slovak Legion an Austro-Hungarian unit in World War I, but this is the first book in a long while devoted to them. It’s a fascinating story; sadly it gets lost in a time period that is overflowing with fascinating stories.

“In 1917, two empires that had dominated much of Europe and Asia teetered on the edge of the abyss, exhausted by the ruinous cost in blood and treasure of the First World War. As Imperial Russia and Habsburg-ruled Austria-Hungary began to succumb, a small group of Czech and Slovak combat veterans stranded in Siberia saw an opportunity to realize their long-held dream of independence. While their plan was audacious and complex, and involved moving their 50,000-strong army by land and sea across three-quarters of the earth’s expanse, their commitment to fight for the Allies on the Western Front riveted the attention of Allied London, Paris, and Washington. On their journey across Siberia, a brawl erupted at a remote Trans-Siberian rail station that sparked a wholesale rebellion. The marauding Czecho-Slovak Legion seized control of the Trans-Siberian Railroad, and with it Siberia. In the end, this small band of POWs and deserters, whose strength was seen by Leon Trotsky as the chief threat to Soviet rule, helped destroy the Austro-Hungarian Empire and found Czecho-Slovakia.”

Following Fish: One Man’s Journey into the Food and Culture of the Indian Coast by Samanth Subramanian. 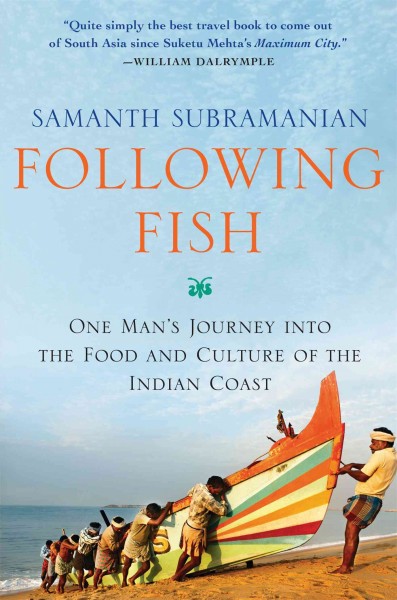 As a person who didn’t like fish all that much growing up but has become passionately fond of it since moving to New England this travel log of the authors search for all things fish in India touched a cord. Plus, I found something funny about potentially reading a book about travel while traveling.

“In India’s long and diverse coastline, fish inhabit the heart of many aspects of life: food of course, and also culture, commerce, sports, history, and society. Journeying along the edges of the peninsula, Samanth Subramanian delivers a kaleidoscope of extraordinary stories. Following Fish conducts rich, journalistic investigations of the use of fish to treat asthmatics in Hyderabad; of the preparation and the process of eating West Bengal’s prized hilsa; of the ancient art of building fishing boats in Gujarat; of the fiery cuisine and the singular spirit of Kerala’s toddy shops; of the food and the lives of Mumbai’s first peoples; of the history of an old Catholic fishing community in Tamil Nadu; and of the hunt for the world’s fastest fish near Goa; and of many others. Pulsating with pleasure, adventure, and discovery, Following Fish reveals a series of unknown Indias in a book as intriguing as the country itself.” 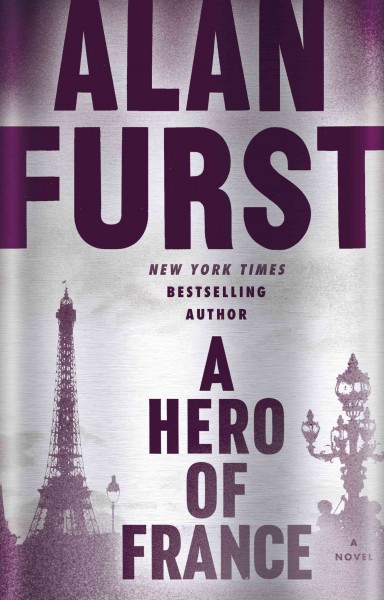 A Hero of France (Night Soldiers, #14) by Alan Furst.
Ever since reading book one in this series, Night Soldiers, ages ago, I have been an on again off again fan of Alan Furst. I have my fingers crossed that this is going to be an excellent historical-espionage-fiction book.

“Paris, 1941. The City of Light, occupied by the Nazis, is dark and silent at night. Streetlamps are painted blue and apartment windows draped or shuttered in the blackout ordered by the Germans. But when the clouds part, the silvery moonlight defies authority, and so does a leader of the French Resistance, known as Mathieu. In Paris and in the farmhouses, barns, and churches of the French countryside, small groups of ordinary men and women are determined to take down the occupying forces of Adolf Hitler. Mathieu leads one such Resistance cell, helping downed British airmen escape back to England. This suspenseful, fast-paced thriller by the author whom Vince Flynn calls “the most talented espionage novelist of our generation” captures this dangerous time as no one ever has before. Alan Furst brings Paris and occupied France to life, along with courageous citizens who outmaneuver collaborators, informers, blackmailers, and spies, risking everything to fulfill perilous clandestine missions. Aiding Mathieu as part of his covert network are Lisette, a seventeen-year-old student and courier; Max de Lyon, an arms dealer turned nightclub owner; Chantal, a woman of class and confidence; Daniel, a Jewish teacher fueled by revenge; Joëlle, who falls in love with Mathieu; and Annemarie, a willful aristocrat with deep roots in France, and a desire to act. As the German military police heighten surveillance, Mathieu and his team face a new threat, dispatched by the Reich to destroy them all.”

I belong to this group of librarians who get together to discuss readers advisory (readers advisory is when you walk up to a librarian and ask “I need something to read” and they give you a book) the topic for our next meeting is World Literature. Six Suspects is me kidding myself that I’ll read something work related while on vacation.

“There’s a caste system even in murder. Seven years ago, Vivek ‘Vicky’ Rai, the playboy son of the Home Minister of Uttar Pradesh, murdered Ruby Gill at a trendy restaurant in New Delhi simply because she refused to serve him a drink. Now Vicky Rai is dead, killed at his farmhouse at a party he had thrown to celebrate his acquittal. The police search each and every guest. Six of them are discovered with guns in their possession. In this elaborate murder mystery we join Arun Advani, India’s best-known investigative journalist, as the lives of these six suspects unravel before our eyes: a corrupt bureaucrat; an American tourist; a stone-age tribesman; a Bollywood sex symbol; a mobile phone thief; and an ambitious politician. Each is equally likely to have pulled the trigger. Inspired by actual events, Vikas Swarup’s eagerly awaited second novel is both a riveting page turner and an insightful peek into the heart and soul of contemporary India.”

The Last Goodnight: A World War II Story of Espionage, Adventure and Betrayal by Howard Blum.
This is the story of Betty Pack, who’s nickname, “Mata Hari from Minnesota,” made it impossible for me not to get this book.

“The New York Times bestselling author of the acclaimed Dark Invasion, channels Erik Larson and Ben Macintyre in this riveting biography of Betty Pack, the dazzling American debutante who became an Allied spy during WWII and was hailed by OSS chief General “Wild Bill” Donovan as “the greatest unsung heroine of the war.” Betty Pack was charming, beautiful, and intelligent—and she knew it. As an agent for Britain’s MI-6 and then America’s OSS during World War II, these qualities proved crucial to her success. This is the remarkable story of this “Mata Hari from Minnesota” (Time) and the passions that ruled her tempestuous life—a life filled with dangerous liaisons and death-defying missions vital to the Allied victory. For decades, much of Betty’s career working for MI-6 and the OSS remained classified. Through access to recently unclassified files, Howard Blum discovers the truth about the attractive blond, codenamed “Cynthia,” who seduced diplomats and military attachés across the globe in exchange for ciphers and secrets; cracked embassy safes to steal codes; and obtained the Polish notebooks that proved key to Alan Turing’s success with Operation Ultra. Beneath Betty’s cool, professional determination, Blum reveals a troubled woman conflicted by the very traits that made her successful: her lack of deep emotional connections and her readiness to risk everything. The Last Goodnight is a mesmerizing, provocative, and moving portrait of an exceptional heroine whose undaunted courage helped to save the world.”