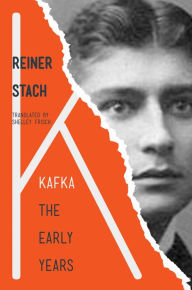 I know what you’re thinking, those of you with less than pleasant memories of Kafka (thanks to High School English class, right?), but here’s the thing: For all that this book is billed as a biography, Kafka is mostly just along for the ride. Which is to say: Have you ever focused your wanderlust on the whim of a dart and a map and came up with Prague? Do you psychoanalyze the people in your life? Are there gaps in your Habsburg Empire knowledge? Or have you ever wondered how to harness Max Brod’s effective networking techniques? If your answer is yes to any of those questions (or any one of many more prompted by the late 1800s and early 1900s in Europe; too many to list without turning towards the unwieldy), then you might find Kafka: The Early Years perfectly suited to your reading life.

It was clear from the outset that Stach was painting a much broader picture in this book, one that included not just the man himself, but the events directly and indirectly occurring to and around Kafka, the place he was born to and other cities he only briefly visited, the numerous influential (and otherwise) people that he took into or rejected from his sphere. It makes for dense if enriching reading material, and might inspire further pursuit of any of those topics listed above. But what if you picked up this Kafka biography because you were wanting a biography of Kafka? Well.

He’s there. His letters and diaries are liberally referred to and quoted from. His work, a lot of which he had yet to write during the period of time covered here (meaning those stories that put him in literary league with the rest of the High School English Class Pantheon and General Greatness), is mentioned with an eye towards giving it a frame of reference: X happened to little Franz, clearly influencing story Y, or character Z. And that frame of reference? Not nearly as stripped down as I made it seem, and fascinating. Certainly if, after you finished reading The Metamorphosis, you a) wanted to take a shower and/or check under the bed for bugs, or b) finally know, for God’s sake, what that giant metaphor was actually all about (well, Kafka, well?). Granted, we can’t know for certain, as Kafka didn’t leave behind a Cliff’s Notes version in his diary, but within those personal pages he recorded scenes and moments in his life that very well could have shaped Gregor Samsa, thereby giving readers insight into a work that strikes some as inscrutable¹.

Would I have been thrilled by the inclusion of even more Kafka? Yes, he’s a delight (read his letters, he really is). But I’m certainly not unhappy with the wider scope of this biography.

¹If that’s something you enjoy (insight into works of literary fiction supported by diaries and letters and such), there’s also Kafka’s Other Trial: The Letters to Felice by Elias Canetti, which posits that the events in The Trial were greatly influenced by the public break-up of Kafka’s engagement.

Kafka: The Early Years is the third and final volume in Stach’s series. The previous two volumes are currently available through NOBLE:
1. Kafka: The Decisive Years
2. Kafka: The Years of Insight