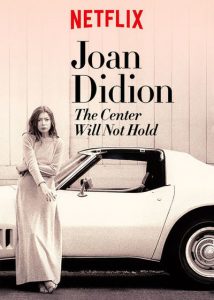 “We tell ourselves stories to live…”

It’s a boon if you’ve dipped into Joan Didion’s oeuvre prior to watching The Center Will Not Hold (directed by Didion’s nephew Griffin Dunne), but is it necessary? In my opinion, no. As a journalist or in her essays, Didion covered several impactful events in recent history, and this documentary puts her writing in the context of those times. Which is to say: US history buffs would, perhaps, enjoy this for those moments alone.

If you’ve already watched the documentary and want to meet Didion in her writing, or if you’d prefer a taste of her work before watching it, we have several books to choose from (all of them either mentioned by title or quoted throughout the documentary). 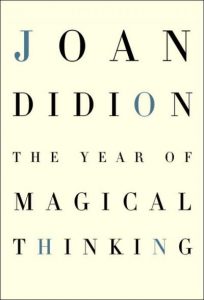 The Year of Magical Thinking

“[In this book, the author] explores an intensely personal yet universal experience: a portrait of a marriage – and a life, in good times and bad – that will speak to anyone who has ever loved a husband or wife or child. Several days before Christmas 2003, John Gregory Dunne and Joan Didion saw their only daughter, Quintana, fall ill with what seemed at first flu, then pneumonia, then complete septic shock. She was put into an induced coma and placed on life support. Days later – the night before New Year’s Eve – the Dunnes were just sitting down to dinner after visiting the hospital when John Gregory Dunne suffered a massive and fatal coronary. In a second, this close, symbiotic partnership of forty years was over. Four weeks later, their daughter pulled through. Two months after that, arriving at LAX, she collapsed and underwent six hours of brain surgery at UCLA Medical Center to relieve a massive hematoma. This … book is Didion’s attempt to make sense of the “weeks and then months that cut loose any fixed idea I ever had about death, about illness . . . about marriage and children and memory . . . about the shallowness of sanity, about life itself.” 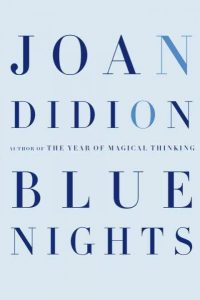 “Richly textured with memories from her own childhood and married life with her husband, John Gregory Dunne, and daughter, Quintana Roo, this new book by Joan Didion is an intensely personal and moving account of her thoughts, fears, and doubts regarding having children, illness and growing old. As she reflects on her daughter’s life and on her role as a parent, Didion grapples with the candid questions that all parents face, and contemplates her age, something she finds hard to acknowledge, much less accept. Blue Nights—the long, light evening hours that signal the summer solstice, “the opposite of the dying of the brightness, but also its warning”—like The Year of Magical Thinking before it, is an iconic book of incisive and electric honesty, haunting and profound.” 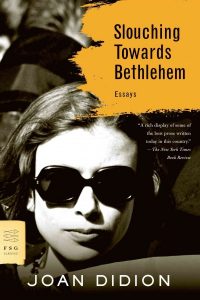 “More than perhaps any other book, this collection by one of the most distinctive prose stylists of our era captures the unique time and place of Joan Didion’s focus, exploring subjects such as John Wayne and Howard Hughes, growing up in California and the nature of good and evil in a Death Valley motel room, and, especially, the essence of San Francisco’s Haight-Ashbury, the heart of the counterculture. As Joyce Carol Oates remarked: “[Didion] has been an articulate witness to the most stubborn and intractable truths of our time, a memorable voice, partly eulogistic, partly despairing; always in control.”” 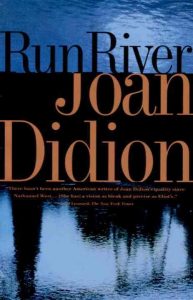 “Joan Didion’s electrifying first novel is a haunting portrait of a marriage whose wrong turns and betrayals are at once absolutely idiosyncratic and a razor-sharp commentary on the history of California. Everett McClellan and his wife, Lily, are the great-grandchildren of pioneers, and what happens to them is a tragic epilogue to the pioneer experience, a story of murder and betrayal that only Didion could tell with such nuance, sympathy, and suspense.” 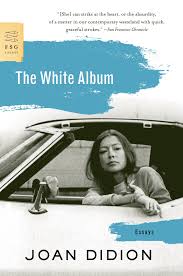 “First published in 1979, The White Album records indelibly the upheavals and aftermaths of the 1960s. Examining key events, figures, and trends of the era―including Charles Manson, the Black Panthers, and the shopping mall―through the lens of her own spiritual confusion, Joan Didion helped to define mass culture as we now understand it. Written with a commanding sureness of tone and linguistic precision, The White Album is a central text of American reportage and a classic of American autobiography.”