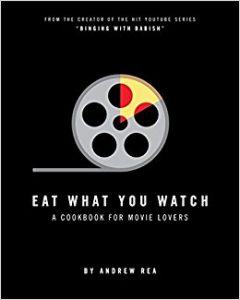 Today’s society is one of avid movie-goers, Netflix bingers, and people who stay up all night for the midnight release of the next Star Wars film. So it makes sense that after inundating our lives with all forms of multimedia, that we have begun to take an interest in the variety of edibles displayed in our favorite films and TV shows. Andrew Rea, star of the popular YouTube series Binging with Babish has taken this collective desire to see food from films and TV, and has brought it to life in his new cookbook, Eat What You Watch: A Cookbook for Movie Lovers.

His YouTube channel which has just under 2 million subscribers, has featured Rea cooking featured recipes from films like Saturday Night Fever and When Harry Met Sally, and recipes from episodes of Adventure Time, The Office, and Twin Peaks. However the readers of his latest cookbook may find a few recipes that were not aired on YouTube, making this book truly worth reading.

Not only does Rea provide the reader with recipes like the disgustingly sweet pasta dish from Elf, but as he guides all of us would-be chefs he uses humor to ease the journey, reminding us that not all dishes were created equally and that not all recipes will come out perfectly on the first try.

So if while you’re watching Julie & Julia and find yourself desiring the boeuf bourguignon, or like me, re-watching Breakfast at Tiffany’s for the 100th time and wondering how to make Holly Golightly’s chicken mole, then this book is for you.