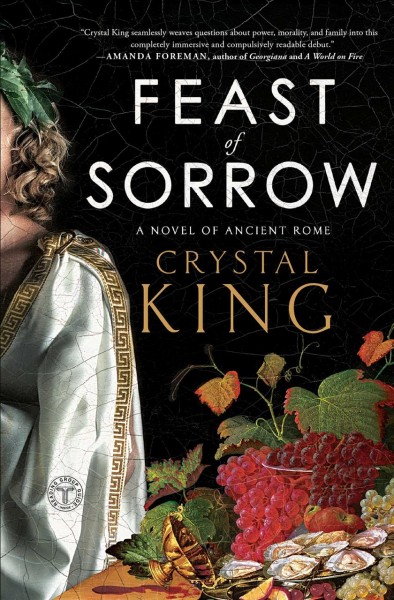 Feast of Sorrow: A Novel of Ancient Rome by Crystal King

Set amongst the scandal, wealth, and upstairs-downstairs politics of a Roman family, Crystal King’s seminal debut features the man who inspired the world’s oldest cookbook and the ambition that led to his destruction.

On a blistering day in the twenty-sixth year of Augustus Caesar’s reign, a young chef, Thrasius, is acquired for the exorbitant price of twenty thousand denarii. His purchaser is the infamous gourmet Marcus Gavius Apicius, wealthy beyond measure, obsessed with a taste for fine meals from exotic places, and a singular ambition: to serve as culinary advisor to Caesar, an honor that will cement his legacy as Rome’s leading epicure.

Apicius rightfully believes that Thrasius is the key to his culinary success, and with Thrasius’s help he soon becomes known for his lavish parties and fantastic meals. Thrasius finds a family in Apicius’s household, his daughter Apicata, his wife Aelia, and her handmaiden, Passia whom Thrasius quickly falls in love with. But as Apicius draws closer to his ultimate goal, his reckless disregard for any who might get in his way takes a dangerous turn that threatens his young family and places his entire household at the mercy of the most powerful forces in Rome. 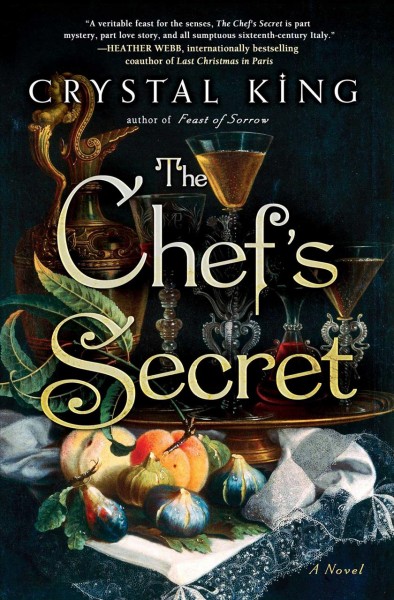 The Chef’s Secret: A Novel by Crystal King.

A captivating novel of Renaissance Italy detailing the mysterious life of Bartolomeo Scappi, the legendary chef to several popes and author of one of the bestselling cookbooks of all time, and the nephew who sets out to discover his late uncle’s secrets—including the identity of the noblewoman Bartolomeo loved until he died.

When Bartolomeo Scappi dies in 1577, he leaves his vast estate—properties, money, and his position—to his nephew and apprentice Giovanni. He also gives Giovanni the keys to two strongboxes and strict instructions to burn their contents. Despite Scappi’s dire warning that the information concealed in those boxes could put Giovanni’s life and others at risk, Giovanni is compelled to learn his uncle’s secrets. He undertakes the arduous task of decoding Scappi’s journals and uncovers a history of deception, betrayal, and murder—all to protect an illicit love affair.

As Giovanni pieces together the details of Scappi’s past, he must contend with two rivals who have joined forces—his brother Cesare and Scappi’s former protégé, Domenico Romoli, who will do anything to get his hands on the late chef’s recipes.

With luscious prose that captures the full scale of the sumptuous feasts for which Scappi was known, The Chef’s Secret serves up power, intrigue, and passion, bringing Renaissance Italy to life in a delectable fashion.