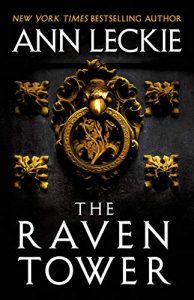 “For centuries, the kingdom of Iraden has been protected by the god known as the Raven.

He watches over his territory from atop a tower in the powerful port of Vastai. His will is enacted through the Raven’s Lease, a human ruler chosen by the god himself. His magic is sustained by the blood sacrifice that every Lease must offer. And under the Raven’s watch, the city flourishes.

But the Raven’s tower holds a secret. Its foundations conceal a dark history that has been waiting to reveal itself…and to set in motion a chain of events that could destroy Iraden forever.”

The patron said: “It’s wonderful. Leckie’s mind is twisty. I like twisty. It’s written in second person present tense omniscient, and you don’t find too many of those!”