Because I can not help but fall down a rabbit hole when I stumble on one, as I have been reading Lakota America, I’ve also been putting together a Plains Indian reading list. This is by no means and exhaustive list but more of a combination of new books and classics on a very complex topic.

The Comanche Empire by Pekka Hämäläinen 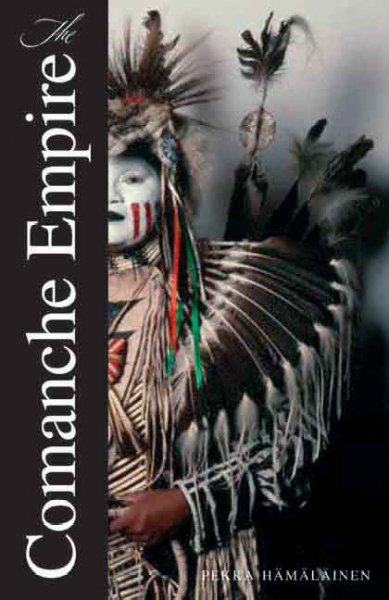 This is was my starting point. After reading the first chapter of Lakota America I thought “what else has this guy written.” I also just love the cover.

In the eighteenth and early nineteenth centuries, a Native American empire rose to dominate the fiercely contested lands of the American Southwest, the southern Great Plains, and northern Mexico. This powerful empire, built by the Comanche Indians, eclipsed its various European rivals in military prowess, political prestige, economic power, commercial reach, and cultural influence. Yet, until now, the Comanche empire has gone unrecognized in American history. This compelling and original book uncovers the lost story of the Comanches. It is a story that challenges the idea of indigenous peoples as victims of European expansion and offers a new model for the history of colonial expansion, colonial frontiers, and Native-European relations in North America and elsewhere. Pekka Hämäläinen shows in vivid detail how the Comanches built their unique empire and resisted European colonization, and why they fell to defeat in 1875. With extensive knowledge and deep insight, the author brings into clear relief the Comanches’ remarkable impact on the trajectory of history. 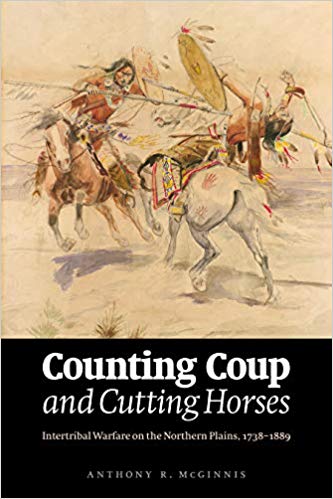 This is a book I’ve read before and recommended here but I think I’m going to reread it now. Sadly it isn’t available in NOBLE but we’d be happy to interlibrary loan a copy from another library for you.

The comprehensive history of more than 150 years of intertribal warfare between northern Plains tribes and a study of the complex rivalries that prevailed among the Native societies that migrated into and around the region. It is a sweeping drama about the warriors’ perpetual search for glory—from the plains of Nebraska to the grasslands of Saskatchewan, from the fields of Minnesota to the forests of Montana. It is also about the attempts of private interests (such as fur trading companies) and the U.S. government to control tribal warfare for their own purposes, and, ultimately, to end it. Anthony R. McGinnis consulted a wide variety of sources, including early travelers’ accounts, government reports, and studies by other authorities, to provide a full account of the intricate cultural systems of the Arapahos, Assiniboines, Blackfeet, Sioux, Shoshonis, and Cheyennes. Depicting one of the most fascinating periods in western history, Counting Coup and Cutting Horses describes warriors such as Dull Knife, Plenty Coups, and Sitting Bull; women such as Sacagawea, Deer Little Woman, and Buffalo Calf Road; the cycle of raids and revenge; the impact of horses and guns; and the role of the American and Canadian governments. 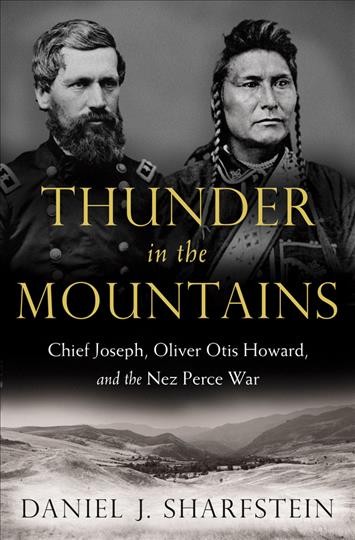 This is one that I’ve been meaning to get to. Aside from Chief Joseph’s famous poem I know sadly little about the Nez Perce War.

After the Civil War and Reconstruction, a new struggle raged in the Northern Rockies. In the summer of 1877, General Oliver Otis Howard, a champion of African American civil rights, ruthlessly pursued hundreds of Nez Perce families who resisted moving onto a reservation. Standing in his way was Chief Joseph, a young leader who never stopped advocating for Native American sovereignty and equal rights. Thunder in the Mountains is the spellbinding story of two legendary figures and their epic clash of ideas about the meaning of freedom and the role of government in American life.

The Apache Wars: The Hunt for Geroni 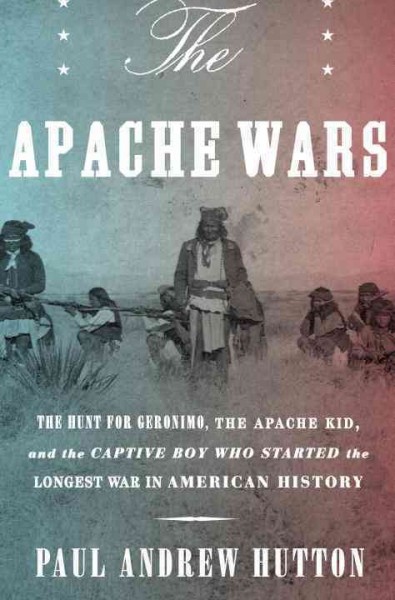 mo, the Apache Kid, and the Captive Boy Who Started the Longest War in American History by Paul Andrew Hutton

Here’s another one that’s been setting on my shelf for awhile.

They called him Mickey Free. His kidnapping started the longest war in American history, and both sides – the Apaches and the white invaders – blamed him for it. A mixed-blood warrior who moved uneasily between the worlds of the Apaches and the American soldiers, he was never trusted by either but desperately needed by both. He was the only man Geronimo ever feared. He played a pivotal role in this long war for the desert Southwest from its beginning in 1861 until its end in 1890 with his pursuit of the renegade scout Apache Kid. In this sprawling, monumental work, Paul Hutton unfolds over two decades of the last war for the West through the eyes of the men and women who lived it. This is Mickey Free’s story but also the story of his contemporaries: the great Apache leaders Mangas Coloradas, Cochise, and Victorio; the soldiers Kit Carson, O. O. Howard, George Crook, and Nelson Miles; the scouts and frontiersmen Al Sieber, Tom Horn, Tom Jeffords, and Texas John Slaughter; the great White Mountain scout Alchesay and the Apache female warrior Lozen; the fierce Apache warrior Geronimo; and the Apache Kid. These lives shaped the violent history of the deserts and mountains of the Southwestern borderlands – a bleak and unforgiving world where a people would make a final, bloody stand against an American war machine bent on their destruction.

Bury my heart at Wounded Knee : an Indian history of the American West by Dee Brown 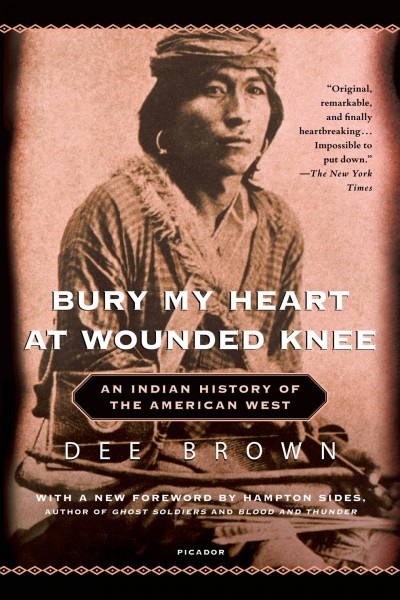 Ok I mostly included this one because it is a classic and it is the book that first got me interested in Native American history.

Bury My Heart at Wounded Knee is Dee Brown’s eloquent, fully documented account of the systematic destruction of the American Indian during the second half of the nineteenth century. A national bestseller in hardcover for more than a year after its initial publication, it has sold almost four million copies and has been translated into seventeen languages. For this elegant thirtieth-anniversary edition—published in both hardcover and paperback—Brown has contributed an incisive new preface. Using council records, autobiographies, and firsthand descriptions, Brown allows the great chiefs and warriors of the Dakota, Ute, Sioux, Cheyenne, and other tribes to tell us in their own words of the battles, massacres, and broken treaties that finally left them demoralized and defeated. A unique and disturbing narrative told with force and clarity, Bury My Heart at Wounded Knee changed forever our vision of how the West was really won. 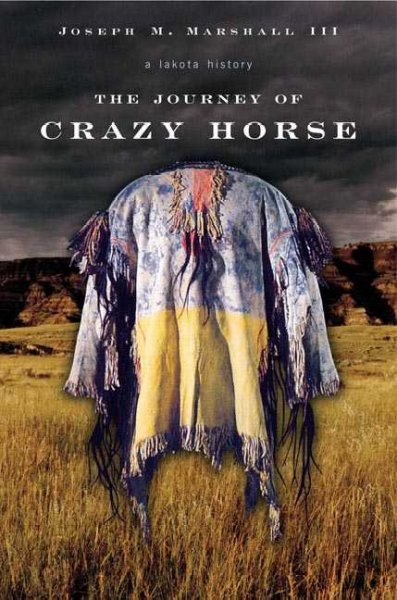 The Journey of Crazy Horse: A Lakota History by Joseph M. Marshall

Probably one of the most famous and almost mythical leaders of the Lakota there are about a million biographies of this guy none of which really do him justice but here is hoping this is the one.

As a brilliant leader of a desperate cause and one of the most perennially fascinating figures of the American West, Crazy Horse crushed Custer’s 7th Cavalry and brought the United States Army to its knees. Now, with the help of celebrated historian Joseph Marshall, we finally have the opportunity to know Crazy Horse as his fellow Lakota Indians knew him.
Drawing on extensive research and a rich oral tradition that it rarely shared outside Native American circles, Marshall – himself a descendant of the Lakota community that raised Crazy Horse – creates a vibrant portrait of the man, his times, and his legacy. From the powerful vision that spurred him into battle to the woman he loved but lost to duty and circumstance, this is a compelling celebration of a culture, an enduring way of life, and the unforgettable hero who remains a legend among legends.