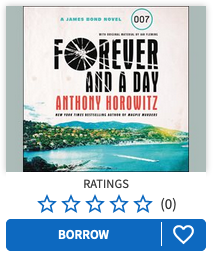 The real crime here is that Forever and a Day appears to be the only audiobook actor Matthew Goode* has narrated. Though imagined—imagined because I cannot know, of course, if he has or hasn’t been thought of—perhaps an even more egregious crime is that not a single rumor** would lead me to believe Goode is being considered to pick up 007’s Walther PPK now that Daniel Craig has put it down and stepped away from the franchise.

Now, I’ve sampled Horowitz’s writing before and quite enjoyed it. (Have you read Magpie Murders? Psst: If you have, Moonflower Murders is releasing in November! Have you given your teen reader Stormbreaker? Do, it’s the first in a young spy series.) And I’ve followed Bond for, oh, nearly as long as I can remember. The product of letting Horowitz loose in Bond’s world is an authentic-feeling, thoroughly engaging ride through the French Riviera’s underworld.

But the reason I’m here is not to thumbs-up the Flemingesque writing or the in keeping storyline. I’m here to make heart eyes at Goode’s narration. Because I could hardly wait to continue listening to it, and because, once the story concluded, my first thought was to go back to the beginning, listen to it again. He made pitch perfect choices throughout, adding wonderful nuance to the story’s tone, while deepening an almost serene sense of nostalgia. Whether he was speaking as Bond, as Bond’s Scottish housekeeper, or as any one of the Americans wreaking havoc here, my reaction ran along the lines of a long string of exclamation points. I loved the voice he created for each and all.

If you listen to Forever and a Day solely for Matthew Goode, well, we should start a club. (But fine, all right, its worth it for the actual words, too, and the shaken not stirred*** plot.)

A spy is dead. A legend is born. This is how it all began. The explosive prequel to Casino Royale, from bestselling author Anthony Horowitz.

Forever and a Day is the story of the birth of a legend, in the brutal underworld of the French Riviera, taking readers into the very beginning of James Bond’s illustrious career and the formation of his identity.

M laid down his pipe and stared at it tetchily. “We have no choice. We’re just going to bring forward this other chap you’ve been preparing. But you didn’t tell me his name.”

The sea keeps its secrets. But not this time.

One body. Three bullets. 007 floats in the waters of Marseille, killed by an unknown hand.

It’s time for James Bond to earn his license to kill.

FYI: Another Bond audiobook gem is On Her Majesty’s Secret Service. David Tennant narrates that one, which is, I think, enough said.

*You might know him from any number of television shows and/or movies: The Crown, A Discovery of Witches, Downton Abbey, A Single Man, The Imitation Game, and so on.

**I am content enough with a few of the names threaded through the rumors I’ve heard. Though since the audiobook put the idea of Goode as Bond in my head, I can see it.