Chris’ Note: The Roger Corman adaptations of Poe stories are good seasonal viewing material if cheesy. My two favorites are House of Usher (1960) and The Masque of the Red Death (1964) 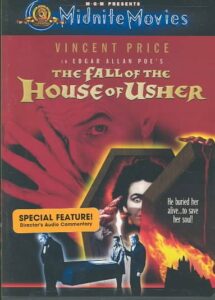 The Fall of the House of Usher

“Upon entering his fiancée’s family mansion, a man discovers a savage family curse and fears that his future brother-in-law has entombed his bride-to-be prematurely.”

The Masque of the Red Death

“A European prince terrorizes the local peasantry while using his castle as a refuge against the “Red Death” plague that stalks the land.”