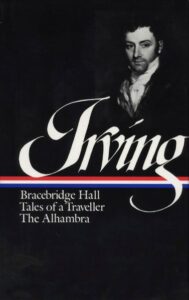 Washington Irving’s work and autumn in New England go hand in hand. The Legend of Sleepy Hollow is perhaps Irving’s best-known work (likely competing only with Rip Van Winkle for that title), most people having either read the story or encountered one of several film/television adaptations in their lifetime, but that tale isn’t the one I go back to every year when the leaves shift shades and cooler currents slip in hour by hour. Come September, you’ll find me re-reading Irving’s “Strange Stories by a Nervous Gentleman,” a set of nested stories that are exquisitely atmospheric, remarkably humorous, and just a shiversome delight to read.

“Sometimes he spent hours together in the great libraries of Paris, those catacombs of departed authors, rummaging among their hoards of dusty and obsolete works in quest of food for his unhealthy appetite. He was, in a manner, a literary ghoul, feeding in the charnel house of decayed literature.” (From “The Adventure of the German Student”) 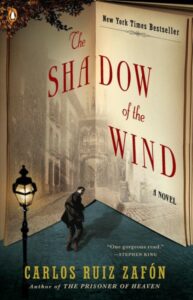 Spanish novelist Carlos Ruiz Zafón’s Cemetery of Forgotten Books series is a knockout choice for this time of year, filled as it is with lavish writing, evocative atmosphere, and supernatural elements—a combination that here and there called to my mind Irving’s work. (Interestingly, Irving lived in Spain for a time, was appointed the US Ambassador to Spain in 1842, and produced several works set inside the country’s borders.)

The Shadow of the Wind – Carlos Ruiz Zafón

“Barcelona, 1945: A city slowly heals in the aftermath of the Spanish Civil War, and Daniel, an antiquarian book dealer’s son who mourns the loss of his mother, finds solace in a mysterious book entitled The Shadow of the Wind, by one Julián Carax. But when he sets out to find the author’s other works, he makes a shocking discovery: someone has been systematically destroying every copy of every book Carax has written. In fact, Daniel may have the last of Carax’s books in existence. Soon Daniel’s seemingly innocent quest opens a door into one of Barcelona’s darkest secrets–an epic story of murder, madness, and doomed love.”

Continue the series with: The Angel’s Game, The Prisoner of Heaven, The Labyrinth of the Spirits 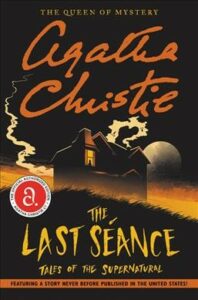 While I read mystery novels year-round, I do tend to gravitate to the genre even moreso when autumn visits our neck of the woods. A particular favorite is—predictably, perhaps—Agatha Christie. You’d be well-served by any of her books, but if you’re wanting one that goes all-in on the particular indulgences of this spooky season you need look no further than The Last Séance. (There’s also Hallowe’en Party, but then I’d recommend watching that episode of Poirot starring the inimitable David Suchet.)

“For lovers of the supernatural and the macabre comes this collection of ghostly and chilling stories from legendary mystery writer Agatha Christie. Fantastic psychic visions, specters looming in the shadows, encounters with deities, a man who switches bodies with a cat—be sure to keep the light on whilst reading these tales. 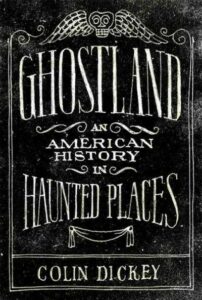 Should your reading preferences lean towards non-fiction, you might (as I did) enjoy Colin Dickey’s Ghostland. Dickey visits Massachusetts more than once in the book (Danvers State Hospital is among the featured sites), but also takes the reader to the west coast and the south.

“Colin Dickey is on the trail of America’s ghosts. Crammed into old houses and hotels, abandoned prisons and empty hospitals, the spirits that linger continue to capture our collective imagination, but why? His own fascination piqued by a house hunt in Los Angeles that revealed derelict foreclosures and “zombie homes,” Dickey embarks on a journey across the continental United States to decode and unpack the American history repressed in our most famous haunted places. Some have established reputations as “the most haunted mansion in America,” or “the most haunted prison”; others, like the haunted Indian burial grounds in West Virginia, evoke memories from the past our collective nation tries to forget.

With boundless curiosity, Dickey conjures the dead by focusing on questions of the living—how do we, the living, deal with stories about ghosts, and how do we inhabit and move through spaces that have been deemed, for whatever reason, haunted? Paying attention not only to the true facts behind a ghost story, but also to the ways in which changes to those facts are made—and why those changes are made—Dickey paints a version of American history left out of the textbooks, one of things left undone, crimes left unsolved.” 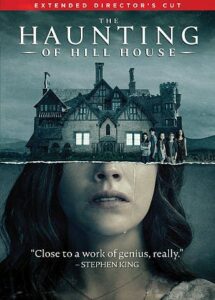 Many, many moons ago I was introduced to Shirley Jackson’s writing with “The Lottery,” and that was that, I was a fan for life. I could (and do!) recommend her novels and story collections (always, no matter the season), but for the purpose of this post I’m going to suggest a recent adaptation of her novel The Haunting of Hill House that was originally released on Netflix but is now available through the library on DVD. If you decide to give it a try be sure to carve out a good chunk of time; the show is addicting, you’ll want to binge watch.

The Haunting of Hill House

“The Haunting of Hill House is the critically-acclaimed, modern reimagining of Shirley Jackson’s legendary novel about five siblings who grew up in the most famous haunted house in America. Now adults, they’re reunited by the suicide of their youngest sister, which forces them to finally confront the ghosts of their pasts… some of which lurk in their minds… and some of which may really be lurking in the shadows of the iconic Hill House.”