Antiquarian booksellers are part scholar, part detective and part businessperson, and their personalities and knowledge are as broad as the material they handle. They also play an underappreciated yet essential role in preserving history. THE BOOKSELLERS takes viewers inside their small but fascinating world, populated by an assortment of obsessives, intellects, eccentrics and dreamers.

Executive produced by Parker Posey, the film features interviews with some of the most important dealers in the business, as well as prominent collectors, auctioneers, and writers such as Fran Lebowitz, Susan Orlean, Kevin Young and Gay Talese. Both a loving celebration of book culture and a serious exploration of the future of the book, the film also examines technology’s impact on the trade, the importance of books as physical objects, the decline of used and rare bookstores, collecting obsessions, and the relentless hunt for the next great find.

And perhaps best of all, THE BOOKSELLERS offers a rare glimpse of many unique and remarkable objects, including the most expensive book ever sold, Da Vinci’s The Codex Leicester; handwritten Borges manuscripts; jeweled bindings; books bound in human flesh; essential early hip-hop documents; accounts of polar expeditions published with samples of real wooly mammoth fur; and many more.” [X] 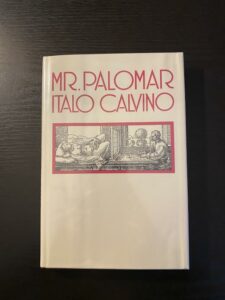 was a couple of decades ago now, but I do remember the one antiquarian book fair I attended, specifically the maze-like quality of the floor’s organizational scheme, the abundance of bright lights in and around glass cases, the relatively thin crowd, and the prices noted in pencil on the page just inside front covers. Some of those prices were gobsmacking. More often than not the edition annotations listed along with the prices were illegible scrawls. I could have asked what made a given book worth the amount it was selling for, inquired after its history, but for myriad reasons that included being young and female, I silently admired and walked away. 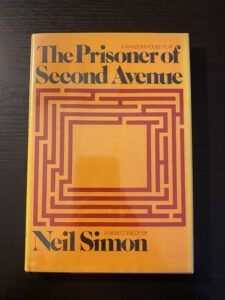 At that fair, one book caught and kept my eye—a first American edition of Italo Calvino’s Mr. Palomar. The price was far from outrageous, and while I owned several of Calvino’s books, my collection did not include that one. Every time I look at it I’m brought back to that maze of aisles, reminded of those bright lights and bookish people.

I own one other book, a gifted copy, that came from an antiquarian bookseller: Neil Simon’s play The Prisoner of Second Avenue. When I asked how and from where, all I was told was that many emails had been exchanged. It seemed clear that while I loved and appreciated the gift, the gift-giver very much enjoyed the experience of hunting down a first edition.

In each case, after I’d acquired the books, I remember wondering how the bookseller came to have these particular copies (an estate sale? was it found on a road trip?), and considered who might have first owned the book (what made that person purchase it? were they a fan of the writer or were they taken by a whim?). It was—and still is—a case of if these books could talk…

From the first, every minute of my job experience has revolved around books—for quite some time I was a bookseller (sadly, not in the type of store featured in the documentary)—and my interest in all aspects of collecting and the business of bookselling shows no sign of waning. After watching The Booksellers, I find myself absolutely needing to learn more about Leona Rostenberg and Madeleine B. Stern, the indomitable women behind Rostenberg & Stern Rare Books. (Rostenberg is also credited with discovering that certain “racy potboilers” were written by Louisa May Alcott.)

If your jaw dropped when you heard that Bill Gates spent roughly thirty million dollars at auction on Leonardo da Vinci’s Leicester Codex, or if you watched and enjoyed 84 Charing Cross Road (based on the book by Helene Hanff), you’ll likely be absorbed by The Booksellers and should check it out on Kanopy.