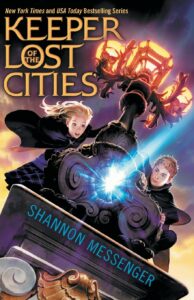 “Twelve-year-old Sophie has never quite fit into her life. She’s skipped multiple grades and doesn’t really connect with the older kids at school, but she’s not comfortable with her family, either. The reason? Sophie’s a Telepath, someone who can read minds. No one knows her secret—at least, that’s what she thinks…

But the day Sophie meets Fitz, a mysterious (and adorable) boy, she learns she’s not alone. He’s a Telepath too, and it turns out the reason she has never felt at home is that, well…she isn’t. Fitz opens Sophie’s eyes to a shocking truth, and she is forced to leave behind her family for a new life in a place that is vastly different from what she has ever known.

But Sophie still has secrets, and they’re buried deep in her memory for good reason: The answers are dangerous and in high-demand. What is her true identity, and why was she hidden among humans? The truth could mean life or death—and time is running out.” 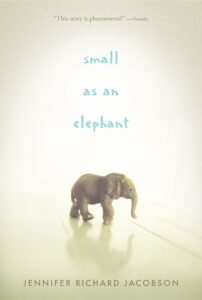 “Ever since Jack can remember, his mom has been unpredictable, sometimes loving and fun, other times caught in a whirlwind of energy and “spinning” wildly until it’s over. But now she is gone, leaving him all alone on a campsite in Maine. Can he find his way back to Boston before the authorities realize what happened? With nothing but a small toy elephant to keep him company, Jack begins a journey that will test his wits and his loyalties — and his trust that he may be part of a larger herd after all.” 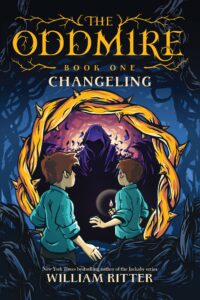 “Magic is fading from the Wild Wood. To renew it, goblins must perform an ancient ritual involving the rarest of their kind—a newborn changeling. But when the night arrives to trade a human baby for a goblin one, something goes terribly wrong. After laying the changeling in a human infant’s crib, the goblin Kull is briefly distracted. By the time he turns back, the changeling has already perfectly mimicked the human child. Too perfectly: Kull cannot tell them apart, so he leaves both babies behind.

Tinn and Cole are raised as human twins, neither knowing what secrets may be buried deep inside one of them. When they are thirteen years old, a mysterious message arrives, calling the brothers to be heroes and protectors of magic. The boys must leave their sleepy town and risk their lives in the Wild Wood, journeying through the Deep Dark to reach the goblin horde and uncover who they truly are.

In this first book in a new fantasy-adventure series, the New York Times bestselling author of Jackaby takes readers on a journey of monsters, magic, and discovery.” 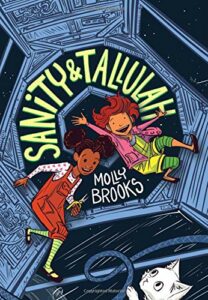 “It can get pretty dull living on a small, out-of-the-way station like Wilnick SS. Best Friends Sanity Jones and Tallulah Vega do their best to relieve the monotony of every day space life by finding adventures, solving mysteries, and taking turns getting each other into and out of trouble. But when Sanity’s latest science project-an extremely-illegal-but-impossibly-cute three-headed kitten-escapes from the lab and starts causing havoc, the girls will have to turn the station upside down to find her-before the damage becomes irreversible!” 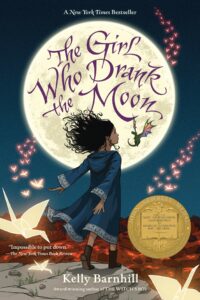 The Girl Who Drank the Moon – Kelly Barnhill (ebook | eaudio)

“Every year, the people of the Protectorate leave a baby as an offering to the witch who lives in the forest. They hope this sacrifice will keep her from terrorizing their town. But the witch in the Forest, Xan, is kind. She shares her home with a wise Swamp Monster and a Perfectly Tiny Dragon. Xan rescues the children and delivers them to welcoming families on the other side of the forest, nourishing the babies with starlight on the journey.

One year, Xan accidentally feeds a baby moonlight instead of starlight, filling the ordinary child with extraordinary magic. Xan decides she must raise this girl, whom she calls Luna, as her own. As Luna’s thirteenth birthday approaches, her magic begins to emerge—with dangerous consequences. Meanwhile, a young man from the Protectorate is determined to free his people by killing the witch. Deadly birds with uncertain intentions flock nearby. A volcano, quiet for centuries, rumbles just beneath the earth’s surface. And the woman with the Tiger’s heart is on the prowl…”