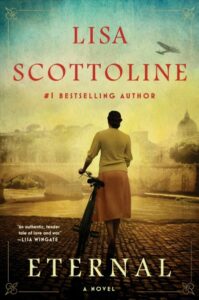 Lisa Scottoline has brought to life the fear and terror of Mussolini’s reign and the horrors of Fascism in World War II Italy. Through the characters of Elisabetta, Marco, Sandro and their families. the reader can visualize what it felt like to be a Jew or a friend of a Jew and the inhumane consequences of both.

A true master of the suspense novel, the author has proven to be a great talent in the genre of historical fiction as well.

Eternal is available in print and as an ebook.

“What war destroys, only love can heal.

Elisabetta, Marco, and Sandro grow up as the best of friends despite their differences. Elisabetta is a feisty beauty who dreams of becoming a novelist; Marco the brash and athletic son in a family of professional cyclists; and Sandro a Jewish mathematics prodigy, kind-hearted and thoughtful, the son of a lawyer and a doctor. Their friendship blossoms to love, with both Sandro and Marco hoping to win Elisabetta’s heart. But in the autumn of 1937, all of that begins to change as Mussolini asserts his power, aligning Italy’s Fascists with Hitler’s Nazis and altering the very laws that govern Rome. In time, everything that the three hold dear–their families, their homes, and their connection to one another–is tested in ways they never could have imagined.