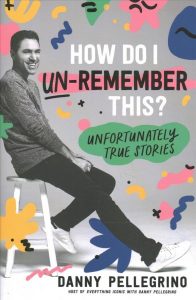 How Do I Un-Remember This?: Unfortunately True Stories

Podcaster Danny Pellegrino’s new book will make you laugh-out-loud one minute, and shed some quick tears the next. Danny shares memories of growing up in the 1990s as a “closeted kid” in a small town in the midwest, and we learn how the internet and reality television became a window into the larger, more diverse world that existed beyond his Ohio neighborhood. Danny’s vulnerability when describing his battle with depression and anxiety is his way of reaching out to his fans and normalizing mental illness, and reducing the stigma of therapy.  He describes the close relationship that he has with his family, while also detailing how isolating it felt growing up feeling like he had to hide his authentic self from everyone, including himself.

Danny’s passion for television, movies and eventually reality tv served as his escape while growing up, and helped lay the foundation for his success as the host of a reality television podcast. While Danny’s friends and neighbors were thriving on the football and soccer fields, Danny was finding solace in Fran Fine’s character in The Nanny, singing along with Britney, Brandy, and the boy bands of the 90s, and catching glimpses of a semi-naked Ryan Phillippe in the movies. Danny’s memories are filled with 90s nostalgia and are relatable to anyone who remembers the 90s with any fondness at all! His honesty, vulnerability, and charm shine through every memory and story in the book. I discovered Danny’s podcast as a passionate fan of Bravo TV and its shows, but you do not have to be a fan of Bravo or any other reality television outlet to enjoy this awesome book.