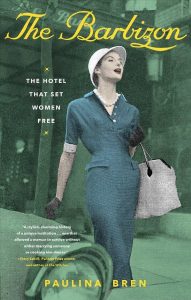 The Barbizon: The Hotel That Set Women Free is about the residential hotel for women that was built in 1928 and functioned as a hotel until the 21st century when it was converted into condos. Bren writes about how and why the Barbizon was built, but the overall story is about the history of women working in the U.S.

Famous residents of the hotel included Grace Kelly, Joan Didion, Sylvia Plath, Cloris Leachman, Ali MacGraw, Phylicia Rashad, and many, many more. Sylvia Plath’s stay at the Barbizon while holding a summer internship at Mademoiselle magazine featured (albeit fictionally) in her novel The Bell Jar. What I thought was particularly interesting was how Bren described how Sylvia Plath’s life and death impacted The Barbizon, especially how it was perceived culturally.

I enjoyed reading The Barbizon because Bren didn’t just focus on the famous residents, she included the stories of “ordinary” women who lived there. When we look at history, it’s easy to focus on the great women and men whose lived incredible lives and forget that those people are actually a minority. Everyone else gets pushed to the side, and I feel Bren rectifies that in the book. She chronicles the history of women’s labor in the U.S., explaining how historical events changed the views of women working, as well as how much has stayed the same.