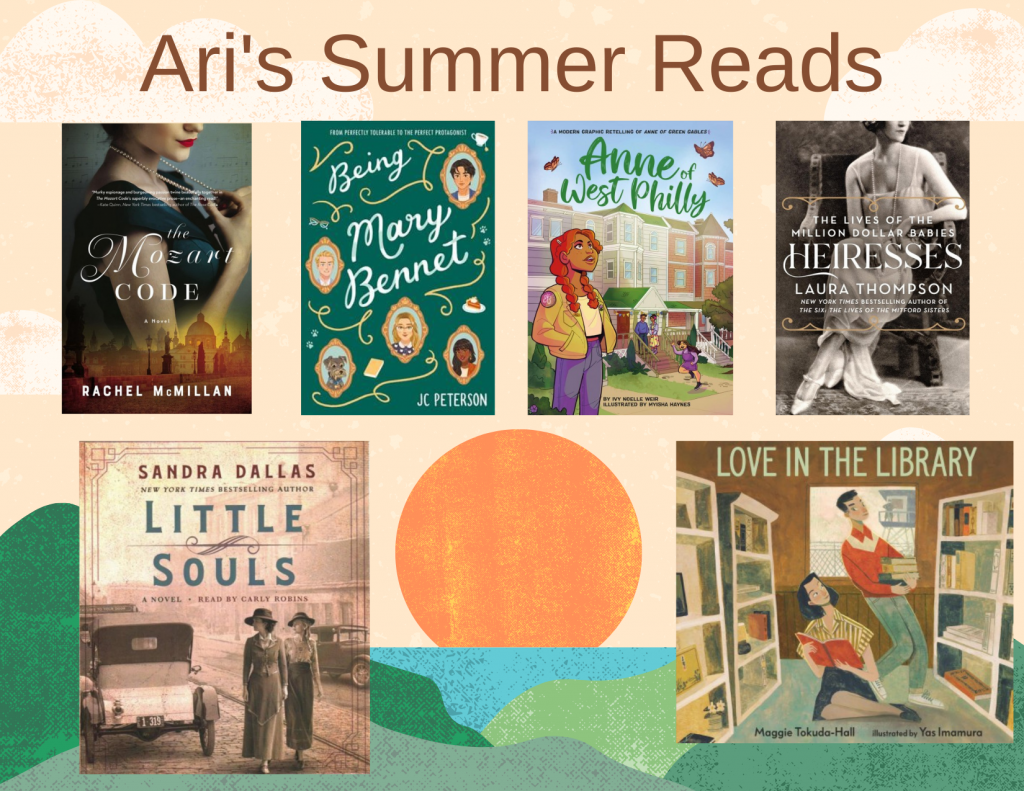 The Mozart Code by Rachell McMillan

From author Rachel McMillan comes a richly researched historical romance that takes place in post-World War II Europe and features espionage and a strong female lead.Lady Sophia Huntington Villiers is no stranger to intrigue, as her work with Alan Turing’s Bombe Machines at Bletchley Park during the war attests. Her wartime marriage of convenience to Simon Barre, the eighth earl of Camden, granted her the independence she craved and saved his estate. Now, as part of his covert team in postwar Vienna, she uses her charm to uncover a lethal double agent immersed in the world of relics-including the long lost death mask of Mozart. Simon is determined to gather any information he can to end the Cold War before it becomes as devastating as the war Britain has just won. He has been secretly in love with Sophie Villiers for years, and their work together in Vienna leads him to hope for genuine romance in their marriage. Until a mission in Prague drives Sophie to a decision that will brand her not only a traitor to her country but also to her husband.With Sophie’s allegiance in question, Simon is torn between his duty to the crown and saving the woman who might have betrayed his cause and his heart

Being Mary Bennet by JC Peterson

It is a truth universally acknowledged that every bookworm secretly wishes to be Lizzy Bennet from Pride and Prejudice. A less acknowledged truth is that Mary Bennet might be a better fit. For Marnie Barnes, realizing she’s a Mary Bennet is devastating. But she’s determined to reinvent herself, so she enlists the help of her bubbly roommate and opens up to the world. And between new friends, a very cute boy, and a rescue pup named Sir Pat, Marnie finds herself on a path to becoming a new person entirely. But she’s no Lizzy, or even Mary–instead, she’s someone even better: just plain Marnie.

In this modern retelling, Anne is fostered into the West Philly home of siblings Marilla and Matthew, and while she initially has a hard time at school, she ends up joining the robotics team and competes for a spot in an elite STEM program.

Heiresses: The Lives of the Million Dollar Babies by Laura Thompson

Heiresses: surely they are among the luckiest women on earth. Are they not to be envied, with their private jets and Chanel wardrobes and endless funds? Yet all too often those gilded lives have been beset with trauma and despair. Before the 20th century a wife’s inheritance was the property of her husband, making her vulnerable to kidnap, forced marriages, even confinement in an asylum. And in modern times, heiresses fell victim to fortune-hunters who squandered their millions. Heiresses tells the stories of these women: Mary Davies, who inherited London’s most valuable real estate, and was bartered from the age of twelve; Consuelo Vanderbilt, the original American “Dollar Heiress”, forced into a loveless marriage; Barbara Hutton, the Woolworth heiress who married seven times and died almost penniless; Patty Hearst, heiress to a newspaper fortune who was arrested for terrorism. However, there are also stories of achievement: Angela Burdett-Coutts, who became one of the greatest philanthropists of Victorian England; Nancy Cunard, who lived off her mother’s fortune and became a pioneer of the civil rights movement; Daisy Fellowes, elegant linchpin of interwar high society and noted fashion editor. Heiresses is about the lives of the rich, who-as F. Scott Fitzgerald said-are ‘different’. But it is also a bigger story about how all women fought their way to equality, and sometimes even found autonomy and fulfilment

Sandra Dallas’s Little Souls is a gripping tale of sisterhood, loyalty, and secrets set in Denver amid America’s last deadly flu pandemic Colorado, 1918. World War I is raging overseas, but it’s the home front battling for survival. With the Spanish Flurampant, Denver’s schools are converted into hospitals, churches and funeral homes are closed, and nightly horse-drawn wagons collect corpses left in the street. Sisters Helen and Lutie have moved to Denver from Ohio after their parents’ death. Helen, a nurse, and Lutie, a carefree advertising designer at Neusteter’s department store, share a small, neat house and each finds a local beau – for Helen a doctor, for Lutie a young student who soon enlists. They make a modest income from a rental apartment inthe basement. When their tenant dies from the flu, the sisters are thrust into caring the woman’s small daughter, Dorothy. Soon after, Lutie comes home from work and discovers a dead man on their kitchen floor and Helen standing above the body, an icepickin hand. She has no doubt Helen killed the man-Dorothy’s father-in self-defense, but she knows that will be hard to prove. They decide to leave the body in the street, hoping to disguise it as a victim of the flu. Meanwhile Lutie also worries about her fiance “over there”. As it happens, his wealthy mother harbors a secret of her own and helps the sisters as the danger deepens, from the murder investigation and the flu. Set against the backdrop of an epidemic that feels all too familiar, Little Souls isa compelling tale of sisterhood and of the sacrifices people make to protect those they love most

Love in the Library by Maggie Tokuda-Hall

After the bombing of Pearl Harbor, Tama is sent to live in a War Relocation Center in the desert. All Japanese Americans from the West Coast—elderly people, children, babies—now live in prison camps like Minidoka. To be who she is has become a crime, it seems, and Tama doesn’t know when or if she will ever leave. Trying not to think of the life she once had, she works in the camp’s tiny library, taking solace in pages bursting with color and light, love and fairness. And she isn’t the only one. George waits each morning by the door, his arms piled with books checked out the day before. As their friendship grows, Tama wonders: Can anyone possibly read so much? Is she the reason George comes to the library every day? Beautifully illustrated and complete with an afterword, back matter, and a photo of the real Tama and George—the author’s grandparents—Maggie Tokuda-Hall’s elegant love story for readers of all ages sheds light on a shameful chapter of American history. [goodreads]