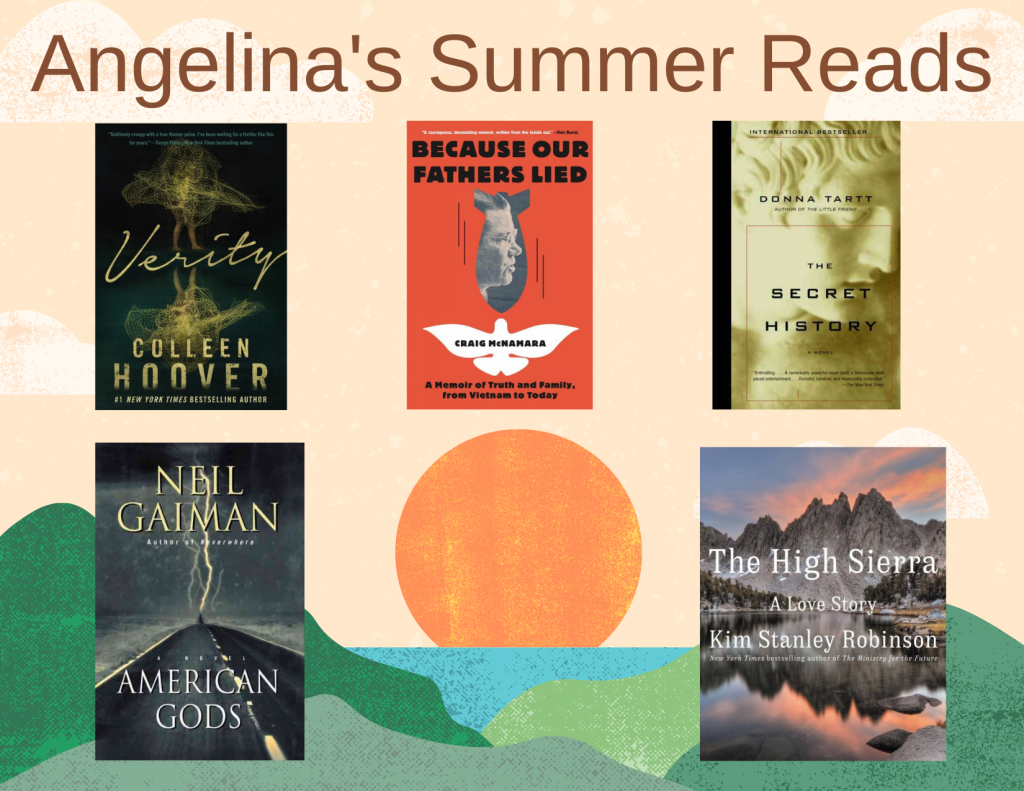 The Secret History by Donna Tartt

Under the influence of their charismatic classics professor, a group of clever, eccentric misfits at an elite New England college discover a way of thinking and living that is a world away from the humdrum existence of their contemporaries. But when they go beyond the boundaries of normal morality they slip gradually from obsession to corruption and betrayal, and at last—inexorably—into evil. [goodreads]

Lowen Ashleigh is a struggling writer on the brink of financial ruin when she accepts the job offer of a lifetime. Jeremy Crawford, husband of bestselling author Verity Crawford, has hired Lowen to complete the remaining books in a successful series his injured wife is unable to finish. Lowen arrives at the Crawford home to sort through years of Verity’s notes and outlines, hoping to find enough material to get started. Lowen uncovers an unfinished autobiography Verity never intended anyone to read, with pages of bone-chilling admissions, including Verity’s recollection of the night their family was forever altered. Lowen decides to keep the manuscript hidden from Jeremy, knowing its contents would devastate him. But as Lowen’s feelings for Jeremy begin to intensify, she recognizes all the ways she could benefit, if he were to read his wife’s words. After all, no matter how devoted Jeremy is to his injured wife, a truth this horrifying would make it impossible for him to continue to love her.

As Shadow is about to be released from prison, he learns that his beloved wife has been killed in an accident. Feeling he has nothing else to lose, he becomes involved in a dangerous scheme that could cause him to lose more than he ever imagined.

Because Our Fathers Lied by Craig McNamara

Craig McNamara came of age in the political tumult and upheaval of the late 60s. While Craig McNamara would grow up to take part in anti-war demonstrations, his father, Robert McNamara, served as John F. Kennedy’s Secretary of Defense and the architect of the Vietnam War. This searching and revealing memoir offers an intimate picture of one father and son at pivotal periods in American history. Because Our Fathers Lied is more than a family story—it is a story about America. [goodreads]

The High Sierra: A Love Story by Kim Stanley Robinson

Kim Stanley Robinson first ventured into the Sierra Nevada mountains during the summer of 1973. He returned from that encounter a changed man, awed by a landscape that made him feel as if he were simultaneously strolling through an art museum and scrambling on a jungle gym like an energized child. He has returned to the mountains throughout his life—more than a hundred trips—and has gathered a vast store of knowledge about them. The High Sierra is his lavish celebration of this exceptional place and an exploration of what makes this span of mountains one of the most compelling places on Earth. Over the course of a vivid and dramatic narrative, Robinson describes the geological forces that shaped the Sierras and the history of its exploration, going back to the indigenous peoples who made it home and whose traces can still be found today. He celebrates the people whose ideas and actions protected the High Sierra for future generations. He describes uniquely beautiful hikes and the trails to be avoided. Robinson’s own life-altering events, defining relationships, and unforgettable adventures form the narrative’s spine. And he illuminates the human communion with the wild and with the sublime, including the personal growth that only seems to come from time spent outdoors.The High Sierra is a gorgeous, absorbing immersion in a place, born out of a desire to understand and share one of the greatest rapture-inducing experiences our planet offers. Packed with maps, gear advice, more than 100 breathtaking photos, and much more, it will inspire veteran hikers, casual walkers, and travel readers to prepare for a magnificent adventure.