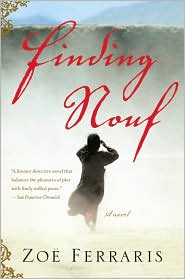 Originally from Palestine, Nayir is something of an outsider in Saudi Arabia. As a desert guide, he has become familiar with the bedouin customs, but the bedouins do not welcome him into their social circles and the Saudi’s think he is too much like a bedouin to be a Saudi. Yet he is highly regarded by members of the wealthy Shrawi family and when their soon-to-be married daughter Nouf goes missing in the desert they call on Nayir to search for her. When her body is found in a Wadi, his mission changes from search and rescue to murder investigation. At the morgue, Nayir meets Katya Hijazi a lab technician. Nayir is taken aback by her forwardness (no veil, eye contact) but he finds an ally in her. They both disagree with the coroner’s assessment that Nouf’s death was an accident. Nayir is uncomfortable working with Katya, but she is the only way that he has access to the female world of Saudi society.

I love to read about books that introduce me to cultures that are different from my own. As someone who married into a family of Saudi-Palestinian bedouins, Ferraris has first-hand knowledge of this world. It is hard to believe that viewing a woman’s ankle could have such an unsettling affect on a man, but Ferraris writes Nayir’s character in a what that is so sincere that you believe his internal struggle to work with a woman. The mystery uncovers a fascinating world where personal ambition and societal norms collide, but the developing relationship between the two investigators is just as engaging.