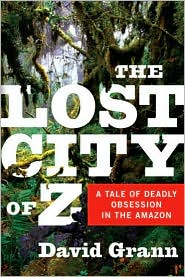 David Grann is a reporter for the New Yorker Magazine who likes to write about people who are obsessed with one thing or another, so writing about Percy Fawcett’s obsession with the Amazon rainforest and a lost civilization in that region was a perfect assignment for him. Grann gives the reader a wonderful look at Fawcett’s personality and career. He was one of the last “gentleman explorers” as exploration became more academic in nature. After Fawcett disappears on his last highly secretive journey to find his lost civilization that he referred to only as “Z”, the mystery of his disappearance sparked another obsession among a variety of people who were determined to find out what happened to Fawcett. As far as obsessions go, this is a dangerous one. As many as 100 people have died looking for Fawcett and his lost city.  Ultimately Grann, who takes the elevator to his second floor apartment and has never gone camping in his life, is drawn to the Amazon. His experiences interspersed among those of Fawcett and his followers made this fast-paced adventure story more compelling. His characters are fully-developed and there are some interesting secondary characters. Grann really knows how to tell a story so that you can’t put it down. After reading the preface, I was in for the long-haul and the ending took me by surprise. I think this book would have a great deal of cross-over appeal for fiction reader’s who like adventure, history and armchair travel.

One thought on “Lost City of Z ~ David Grann”