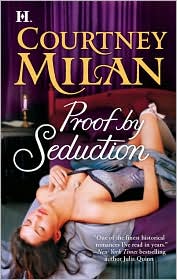 This is Milan’s debut historical romance featuring Gareth, Lord Blakely. Gareth is used to getting what he wants and his icy demeanor tends to cause people to scurry around to please him. When he finds that his cousin Ned has been spending his money visiting a fortune teller, he is determined to prove her a fraud. Gareth is a man of science and expects to easily expose her as a charlatan. What Gareth doesn’t expect is that Madame Esmeralda (aka Jenny Keeble) isn’t going down without a fight. She is quick on her feet and though she may not actually be able to tell the future, she knows a good deal about human nature and she sees right through his icy façade. Their battle of wit and will proves to be a prefect attraction.

Milan creates memorable characters and that helps make the romance work. Gareth starts out like your average dark and brooding leading male. He has few friends and he can’t have a conversation with his sister without making her cry. Because of Jenny’s influence he tries not to be so cold and distant. He often fails, but his attempts are both humorous and endearing. Jenny, both strong and independent, is a perfect counterpart to Gareth, because of her ability to read people and to express her affection.  I felt invested in the characters because they were well-developed and you can understand why Gareth is so distant and why Jenny clings to the persona of Madame Esmeralda. Then there is Ned a character who is very lovable but lacks confidence and good sense. He has issues with depression and he seems to be incapable of doing the right thing. Gareth and Jenny’s attempts to get him out of some tough situations help move the story forward.

Ned’s story Trial By Desire will be coming out in October. Click here to read an excerpt.