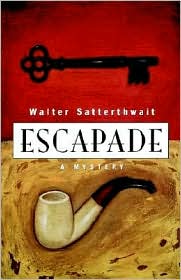 In the summer of 1921, English society is fascinated by the spiritual world – perhaps no one more than the great mystery writer Sir Arthur Conan Doyle, one of thirteen eager guests at a weekend party and seance in a stately Devon manor house steeped in history and tradition. But, as Sir Arthur puts it, “Something very strange, and very sinister, is occurring here at Maplewhite.” Whatever it is, warns his skeptical friend Harry Houdini, it is most certainly of this world, and no other. Their suspicions are amply confirmed when their host, the Earl of Axminster, is found murdered – in a locked room. Suspects and secrets abound, from the lovely Lady Purleigh and her nubile daughter, Cecily, to Dr. Erik Auerbach, the Viennese psychoanalyst, to Mme. Sosostris, the renowned European medium. Nobody is quite what they appear to be, and everyone has something to hide, in a mystery so puzzling that it baffles not only Sir Arthur Conan Doyle, but even the Great Houdini himself. Only the two greatest masterminds of artful deceit could solve a crime so ingeniously crafted and cunningly executed. (Barnes and Noble)

A staff member read this review on Booklust and thought she’d give Escapade at try. Here are her thoughts:

I liked it. It was humorous overall, and really funny in spots, had a nice cozy feel, and interesting characters. The whodunnit part was okay, but the characters were really what kept me reading. I will read the next one in the series.

(The next book in the series is called Masquerade.)