If you like books that take place close to home, we’ll give you a heads-up on titles you may want to check out with Read This’ new Local Connection feature. This time we’ve found one for all of you horror/police procedural fans: Alexandra Sokoloff’s June release, Book of Shadows, features two Boston homicide detectives and a Salem woman. 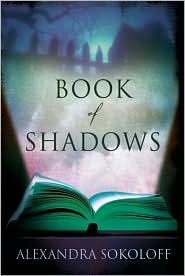 Homicide detective Adam Garrett is already a rising star in the Boston police department when he and his cynical partner, Carl Landauer, catch a horrifying case that could make their careers: the ritualistic murder of a wealthy college girl that appears to have Satanic elements.

The partners make a quick arrest when all evidence points to another student, a troubled musician in a Goth band who was either dating or stalking the murdered girl. But Garrett’s case is turned upside down when beautiful, mysterious Tanith Cabarrus, a practicing witch from nearby Salem, walks into the homicide bureau and insists that the real perpetrator is still at large. Tanith claims to have had psychic visions that the killer has ritually sacrificed other teenagers in his attempts to summon a powerful, ancient demon.

All Garrett’s beliefs about the nature of reality will be tested as he is forced to team up with a woman he is fiercely attracted to but cannot trust, in a race to uncover a psychotic killer before he strikes again. [Source]

If you have a pin number, you can put a reserve on a copy online. If not, give us a call or stop in and we’d be happy to add you to the list. [Catalog Listing]