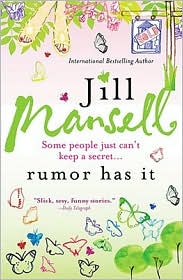 “Newly single Tilly Cole impulsively moves to a small town, only to find she’s arrived in a hotbed of gossip, intrigue, and rampant rivalry for the most desirable man—Jack Lucas, whose reputation is beyond bad. Tilly has no intention of becoming another notch on his bedpost. But she finds the thoughtful, caring guy she comes to value as a friend doesn’t seem to fit the town’s playboy image. Should she listen to her friends or her heart? Is Tilly being mature and sensible—or running away from the love of her life?”

Jill Mansell’s Rumor Has It deals with several residents of Roxborough, not just Tilly and Jack (as the summary would have one believe.) There’s Max and Louisa, the gay father and red-headed daughter duo that Tilly lives with and works for; Erin, Tilly’s best friend, currently engaged in an affair with a not quite divorced man (and feeling awfully guilty about it); Stella, the angry and brutally frank soon-to-be ex-wife; and Kaye, Max’s ex-wife and Hollywood actress on the outs. In that way, with so many little story threads revolving around secondary characters, it read almost like a sitcom (and there were a few humorous moments to further draw the comparison.) And the thing is, I may not have loved any of the characters, but I certainly liked several of them, and that’s what saw me through the book. Implausible outcomes and all. Rumor Has It is just the thing if you want something sweet and light and charmingly entertaining.