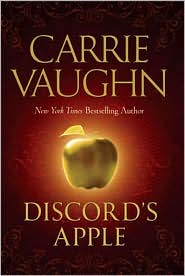 Comic book writer Evie Walker returns home to spend time with her dying father and discovers that her family home in Colorado is not the only thing which will be left to her. Secreted away behind a basement door is a wondrous and magical storeroom where treasures from just about every myth ever told are stored and kept safe from the outside world until they are needed again. Evie’s family have always been the guardians of these treasures and it will fall to Evie to take responsibility for this once her father passes on. Unfortunately this legacy is not without its danger: There are those who will do anything to gain access to the Walker’s storeroom and steal what they want. Thankfully, Evie is helped by her father, a mysterious stranger named Alex, and some unexpected heroes of old. She will need all the help she can get, for there are notorious villains who are determined to use one of the magical treasures to bring upon the apocalypse.

I thought this was a very interesting departure for Carrie Vaughn who is more well known for her “Kitty Norville” urban fantasy series. She manages to combine a near future world which is being torn apart by terrorism and war, with the fall of Troy, and just about every myth and fairytale you could think of. And, she does it spectacularly. The characters are fascinating, even the secondary ones. The plot is extremely fast paced and makes this one of those books that you will find nearly impossible to put down. My only disappointment is that this looks to be a stand alone novel about Evie Walker. This is a great summer read for those of us who like a little escape from the real world.