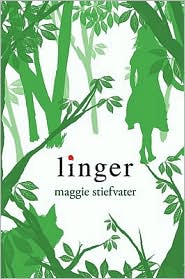 After the events of Shiver, you would think that Grace and Sam would be on the road to a happy life together. Alas, that is not the case in this beautiful and eloquent sequel. Although Sam has seemingly found a way around his werewolf “curse” and is now fully human, he still has to come to terms with his past. Grace also has her own demons to contend with even as she tries to help Sam with his. Added to the mix in this installment is a new wolf named Cole who is desperately trying to escape his own past, even if it means becoming a wolf permanently. He and Isabel find they share a lot in common and become quite an interesting pairing. “Linger” is told in alternating viewpoints from these four characters which instead of being distracting, gives the reader deep personal insight into the events unfolding. It is not a happy book, and it ends with quite the cliffhanger, but for those who fell in love with Sam and Grace in Shiver it is a necessary continuation of their story. This second book is one that will linger with readers long after they put it down, and will leave them breathless for the third installment. Five Stars!