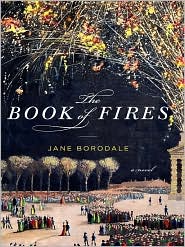 The life changing events in Agnes Trussel’s life seem to occur by chance. She has a knack for either being in the right place at the right time or vice versa. When she accidentally comes upon some money, she flees to London to avoid facing the consequences of her unwanted pregnancy. While it may seem like a misfortune when she loses the address for possible lodgings given to her by a pretty young woman she meets on the way, many a reader may heave a sigh of relief.  Soaking wet and bedraggled, she knocks on the door of one Mr. Blacklock a purveyor of pyrotechnics, only to find that the position posted for a housekeeper has been filled. Seeing something familiar in Agnes, Blacklock agrees to take her in and make her his apprentice. Though Blacklock may be gruff and his staff is less than welcoming, Agnes comes to enjoy learning her new trade. Pleased with her work, Blacklock gives her more and more responsibilities. This allows him to work on his quest to create colored fireworks. But, for Agnes, time is running out before her employer discovers her secret.

Borodale captures an atmosphere of fear, in The Book of Fires, where hangings are a common occurence. It quickens the pace when the reader realizes Agnes might suffer the same fate, if she can’t come up with a reason to explain her predicament. Agnes was a character that I really empathized with and it was upsetting to see her settling into a life that she might not be able to maintain. Blacklock’s appearances were too few, but he never failed to leave an impression. Borodale’s secondary characters were memorable from the horrible kitchen staff to the flamboyant gun powder dealer.  But, it was the fireworks that gave this story a sense of magic. The reader learns alongside Agnes the dangers of making pyrotechnics and gets to feel the wonder of seeing the fruits of her labors in a spectacular fireworks display.

Visit Jane Borodale’s website to view the  trailer for this book.