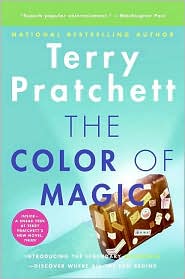 In the first book in Pratchett’s Discworld series, we meet wizard school dropout Rincewind. The Discworld is a flat disc held up by four elephants riding on the back of a giant turtle that wanders through space. Due to a bit of mischief, Rincewind has been imprinted with one of the 8 most powerful spells, but can no longer perform any basic magic. But, he’s very good at languages! One day, he meets a man named Twoflower, the first ever tourist on the Discworld who hires him as a guide. What seems as a way to get some easy money becomes a life-threatening adventure, because it seems wherever Twoflower goes, danger and destruction are sure to follow.

Pratchett’s book is an excellent parody of traditional high fantasy. Think of him as the Douglas Adams of the fantasy world. There are lots of in-jokes, off-the-wall humor and plenty of cult appeal.