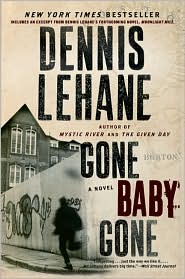 Gone Baby Gone is the fourth book in Dennis Lehane’s series featuring Private investigators Patrick Kenzie and Angela Gennaro. This case opens with the disappearance of little Amanda McCready who is left alone in her Dorchester MA apartment one night by her neglectful mother, only to vanish mysteriously. As they reluctantly agree to work for the child’s aunt and uncle, they form an unlikely alliance with two police officers who belong to the department’s Crimes Against Children squad. The four of them wind up tracing the troubled history of Amanda’s mother which leads them into the squalor of Boston’s crime underworld.

This was my first Dennis Lehane novel and it was quite the experience. I’m not sure I’d call it an enjoyable read given the subject matter, but it was definitely powerful and the ending will stay with you long after you finish the book. The characters are fantastic and you spend half the novel trying to figure out who are really the good guys and who are the bad guys. There are enought plot twists to keep the reader well up into the night. I also loved the way Mr. Lehane describes the Boston area. coming from North of Boston I didn’t even realize all the history behind some of the place he was describing and it really helped bring the story to life. This is a very dark story, but I feel also in some aspects a very realistic one also. While there were parts that I had a difficult time reading and was actually cringing, Mr. Lehane’s writing style, and his incredible characters have intigued me enough that I am probably going to try more of his books, particularly the ones from this series. I would definitely recommend these books to readers of the mystery/noir genre.