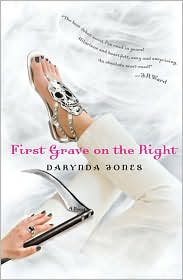 Charley Davidson is a private investigator and a grim reaper. As part of her reaper job description, she must convince dead people to “go into the light”, which in this case strangely enough is Charley herself. Of course things are never that simple. In cases where people have died violently they of course want help in getting justice, which puts Charley in some rather complicated situations with the police, especially since she’s a consultant for them and her uncle is a homicide detective. Luckily he believes in her whole “I see dead people” talent even though she hasn’t shared with him the fact that she’s actually also a portal for the dearly departed. Her latest case begins with not one, not two, but three dead lawyers, all from the same firm, all asking for her help. And just to complicate things, she’s got a dishy dream lover (seriously, one who only appears in her dreams) and a smoky, cloaked entity she calls “Big Bad” who has always been there since she was a child to save her from some of the more dangerous situations she winds up in. All this makes up for one wild ride of a plot.

This is the first book in what looks like will be a series. The second book, “Second Grave on the Left” is coming out in August. I have to say I absolutely loved this! Charley’s sarcasm and sense of humor are hysterical without going over the top. For example I was howling when she explains to one of the police detectives that she works with who was ogling two, ahem, certain parts of her anatomy, that she named them “Danger” and “Will Robinson”! She’s got spunk, and nerve, yet is also vulnerable because she still doesn’t know everything there is to know about herself. She’s also wary about trusting people because even though her uncle, dad, and best friend wholeheartedly embrace her abilities, other people haven’t been so kind, especially her step-mother. Darynda Jones does such a good job bringing Charley to life that you can almost hear her voice as you read. And the secondary charcaters are equally well written. This book is a blend of paranormal, mystery, comedy, with a dash of chick lit thrown in. It will lift your spirits and help you throw off those winter doldrums. I honestly cannot recommend this book enough!

4 thoughts on “First Grave on the Right – Darynda Jones”