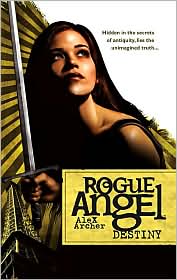 Publisher’s Summary:
“Archaeologist and explorer Annja Creed’s fascination with the myths and mysteries of the past leads her to a crypt in the caves of France, where the terrifying legend of the Beast of Gevaudan hints at the unimaginable.

What she discovers is shattering: an artifact that will seal her destiny; a brotherhood of monks willing to murder to protect their secret; and a powerful black-market occultist desperate to put his own claim to centuries-old blood money.

Annja embarks on a high-tension race across Europe and history itself, intent on linking the unholy treachery of the ages with the staggering revelations of the present. But she must survive the shadow figures determined to silence her threat to their existence.”

For me, the first novel in Alex Archer’s Rogue Angel series was a jam-packed mixed bag. What I can say for sure is this: If your criteria is adventure of the always in danger variety, look no further.

Annja Creed, Archaeologist and part-time reality TV host, is a capable woman. So capable, in fact, you just might have to focus all of your suspension of disbelief on her. Because, folks, Annja can do it all. Execute a Bruce Lee worthy martial arts move? Check. Speak several languages fluently? Of course. Rock climb; lock, load and shoot a weapon; cook a delicious breakfast; out con a conman? Yes, yes, yes, and yes. And that’s condensing her skills to a highlight reel. Annja is likeable enough; I just found myself often indulging in a good old-fashioned eye roll when she pulled a new trick out of her ever-present backpack. Annja aside, the majority of the story’s characters are morally ambiguous ruffians or outright bad guys, all intent on saving or snuffing Annja’s life.

As for the story itself, I was intrigued by Annja’s pursuit of the Beast of Gevaudan, and was more than a little surprised by the decidedly supernatural slant of several plot points: Joan of Arc’s sword, the Wild Hunt. There’s plenty of history tucked in between all of that madness too.

The pace was so swift, what with Annja constantly on the move, fighting, or hastily figuring things out, that the story as a whole began to blur. I appreciated the fact that Destiny was an incredibly quick read, but slowing it down a bit and keeping an eye on consistency wouldn’t have done the story any considerable harm.

As I mentioned, if you want a hang-tight, what-could-possibly-happen-next (oh, that!) adventure, Destiny fits the bill.