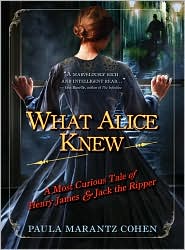 “An invalid for most her life, Alice James is quite used to people underestimating her. And she generally doesn’t mind. But this time she is not about to let things alone. Yes, her brother Henry may be a famous author, and her other brother William a rising star in the new field of psychology. But when they all find themselves quite unusually involved in the chase for a most vile new murderer-one who goes by the chilling name of Jack the Ripper-Alice is certain of two things:

No one could be more suited to gather evidence about the nature of the killer than her brothers. But if anyone is going to correctly examine the evidence and solve the case, it will have to be up to her.”

I must confess to knowing very little about the lives and work of the James brothers prior to reading What Alice Knew. That said, their roles in the story- and also Oscar Wilde’s, John Singer Sargent’s, and other contemporaries of the time – had a hand in drawing me to Cohen’s novel, which offers a not-necessarily-new yet still involving take on Jack the Ripper’s identity.

A healthy amount of the enjoyment I take from novels that insert historical figures into the plot is tied up in the opportunity to learn more about them. While I read What Alice Knew, I allowed myself short forays online to flesh out my very basic knowledge of the James family, and found that Alice James’ diary was published after her death, that Ralph Waldo Emerson was William James’ godfather, and that I really must read Henry James’ Washington Square. But within the context of the story, Cohen makes it possible to know these people by providing pertinent background information, and she does so without it ever feeling heavy-handed or like unnecessary exposition.

I also happen to be a sucker for partnerships in my fiction, and so part of the appeal here was that the James siblings, vastly different in terms of personality and beliefs, formed an investigative team, each bringing their individual strengths to the table in order to put a stop to the Ripper’s crimes. Watching them discuss their suppositions was, perhaps, my favorite aspect of the novel; it paired the deductive process I love so much with sibling squabbles, insecurities, and (mostly) affectionate put-downs.

Then there’s the setting: the story weaves from the streets of Whitechapel to Wilde’s drawing room, from Scotland Yard to the men’s clubs of England’s esteemed colleges. If you’re a fan of historical detail, What Alice Knew looks at spiritualism, art, emerging psychological theories, the suffragette movement in England, the ethical treatment of individuals confined to mental institutions, the aristocracy of the old world opposed to the individualism of the new world, and, of course, Jack the Ripper.

And doesn’t that name just conjure up an ominous atmosphere in its own right? In Cohen’s hands, his crimes are gruesome, but they’re looked at not so much from a horrified observer’s view, but by someone who is trying to rationalize the horrific. It’s a distinction to take note of if the Ripper’s brand of violence puts you off.

To sum up, there is one word that – despite how clichéd it has become to use in this context – applies nonetheless: fascinating. From learning more about the James siblings and the times they lived in to watching clues and evidence being assembled and argued over, What Alice Knew was a solid historical fiction (with more than a passing nod to the mystery genre) read.