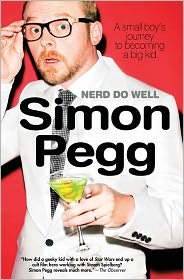 Publisher’s Summary:
“The unique life story of one of the most talented and inventive comedians, star of Shaun of the Dead, Hot Fuzz, and Star Trek.

Zombies in North London, death cults in the West Country, the engineering deck of the Enterprise: actor, comedian, writer and self-proclaimed supergeek Simon Pegg has been ploughing some bizarre furrows in recent times. Having landed on the U.S. movie scene in the surprise cult hit Shaun of the Dead, his enduring appeal and rise to movie star with a dedicated following has been mercurial, meteoric, megatronic, but mostly just plain great.

From his childhood (and subsequently adult) obsession with science fiction, his enduring friendship with Nick Frost, and his forays into stand-up comedy which began with his regular Monday morning slot in front of his twelve-year-old classmates, Simon has always had a severe and dangerous case of the funnies.

Whether recounting his experience working as a lifeguard at the city pool, going to Comic-Con for the first time and confessing to Carrie Fisher that he used to kiss her picture every night before he went to sleep, or meeting and working with heroes that include Peter Jackson, Kevin Smith, and Quentin Tarantino, Pegg offers a hilarious look at the journey to becoming an international superstar, dotted with a cast of memorable characters, and you’re rooting for him all the way.”

“In the kitchen out back, such was our deep affiliation to John and Bernie. But mostly, life for us at the Shepherds consisted of Nick and me simply sitting and discussing the world while sipping pints or ploughing pound coins into the Simpson fruit machine. Ideas were born and plans were hatched as we luxuriated amid the matchless comfort of our surroundings. On Monday nights, we would sit up at the bar and watch University Challenge with John, usually the sole customers. We would throw out answers at the TV, usually falling short of anything Jeremy Paxman would accept as correct. On the odd occasion that we came good on a starter for ten, John would look at us both with an expression of admiration and declare us to be a couple of geniuses. One of our frequent topics of conversations in the Shepherds was what we would do in the event of a full-scale zombie apocalypse. We would discuss the hypotheses in great detail, tracking our movements from witnessing a stray deadhead in the garden, through running along the rooftops of Archway Road to Pax Guns in order to retrieve a brace of ordnance, then commandeering a vehicle to take us to our choice of hideout. These varied from abandoned castles to Wembley Stadium, the centre of which Nick insisted would afford us a clear view of any stray zombies that breached the perimeter and give us a workable farm space to grow crops for sustenance.”