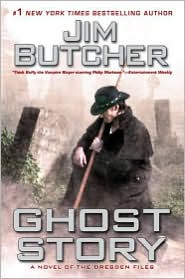 MAY INCLUDE SPOILERS FOR PREVIOUS BOOKS IN THE SERIES.

When Changes ended Harry Dresden had surpassed his personal best for getting beat up, hurt, and tortured. Not enough, the closing chapter ended with him being murdered by an unknown assassin. But of course, being dead isn’t going to stop the mighty Harry. Especially when his friends are in mortal peril. There is one small problem though. As a ghost, Harry no longer has any magic to call upon. Will he be able to once again save the day?

First off I take exception to something Jim says in his forward: “To my dear patrons, the readers, I can only thank you for your patience, after leaving the last novel the way I did, then making everyone wait another three months past the usual delay while I made sure this book was ready to go. Enjoy!” Okay. So far, so good right? This particular fan would wait forever for a new Harry Dresden book, even if it meant numerous visits to the dentist due to her grinding her teeth! Here’s the bit I take issue with: “(And, technically, guys, Changes did NOT end in a cliff-hanger. Seriously.)” I mean come on Jim! Really? It’s all well and good for you since you’re Harry’s creator, and you already knew what new road his life, or un-life was going to take. For the rest of us it was more than a year of agonizing! All I have to say is Hmph! Okay. Now for the review. Ghost Story picks up exactly where Changes left off, at least for Harry. For his friends however an excruciating six months have passed since he disappeared and there have been quite a few changes. Molly is extremely unstable and now goes by the name Rag Lady, and Murphy has gone all commando. There are new villains in Chicago who are gleefully taking advantage of Harry’s absence, and some old ones as well including one very familiar nasty piece of work. After Ghostly Harry is told that he must return to solve the mystery of his death, he finds to his dismay that he cannot communicate with his friends and he has to rely on some unlikely allies and technology to convince them he’s back, sort of. Of course don’t think being a spirit exempts Harry from his usual pain and suffering. There’s plenty of that. There’s also quite a bit more the reader discovers about Harry’s past which I absolutely loved. Actually, there were only two things missing from most of the book that prevents me from listing this in my top three favorites of the series. Barely any Thomas and Mouse! Honestly! Well, I’m keeping my fingers crossed that Jim will make up for this glaring deficit in his next installment.

Warning: The Harry Dresden series should definitely be read in order starting with Storm Front. The series would definitely appeal to fans of Urban Fantasy as well as Noir Mystery.

Check to see the catalog to determine the status of Ghost Story.