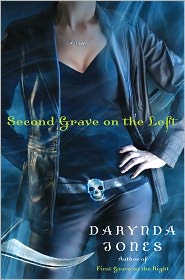 Poor Charley Davidson. Not only has her boyfriend woken up from a coma and disappeared from a secure hospital, but now she’s being woken up at an ungodly hour by her best friend who’s throwing clothes at her (and ones that don’t even match, shudder.) Finally, Cookie explains to her that a friend of hers named Mimi disappeared five days ago, and just sent a text message to her asking her to meet at a coffee shop. Alas, when Charley and Cookie show up, there is no Mimi. There are some curious clues however left in the form of messages on the bathroom wall. Meanwhile Charley’s hunky boyfriend Reyes Alexander Farrow, (aka the Son of Satan. Yes. Seriously) has left his corporeal body and is haunting Charley. It’s seems as though his physical body is being tortured by demons who want to use him to trap Charley. After all, as the Grim Reaper, she is the key to them getting into Heaven. So, now not only does Charley have to find Cookie’s missing friend, but she also has to track down a boyfriend who doesn’t want to be found, and oh yeah, find out who the dead guy is in Cookie’s trunk. All this while attempting to cure Cookie’s lamentable taste in fashion, and deal with certain overprotective family members. It’s enough to challenge even the most intrepid of PIs.

I didn’t think anything could be funnier than Darynda’s first book First Grave on the Right. I stand corrected. First of all, the chapter headings are hysterical and are all t-shirt slogans like: “Death is NOT a morning person”, and “Carpe Caffee”. I seriously got a case of the giggles everytime I read one of these. Charley is her usual fun and witty self. Honestly, I just want to be her, well except for the Grim Reaper part. Darynda manages to make Charley’s whimsical and at times outrageous personality come across as clever and funny rather than annoying and self-indulgent. There were basically at least three different storylines going on, but never once did the book get bogged down or confusing. The main mystery is a little more complex in this second books and admidst all the humor there are some very serious moments. Darynda is also evidently fond of ending her books with cliffhangers. Thankfully the next book Third Grave Dead Ahead is being released in February of 2012, so we won’t have that long to wait. It’s not completely necessary to read the books in order since Darynda includes pertinent facts from the first book without it being repetetive, but I would recommend you do so anyway. This series is great for anyone who enjoys mysteries, the supernatural, and chick-lit. I cannot reccommend Darynda Jones enough!

Check the catalog for Second Grave On the Left

One thought on “Second Grave On the Left – Darynda Jones”