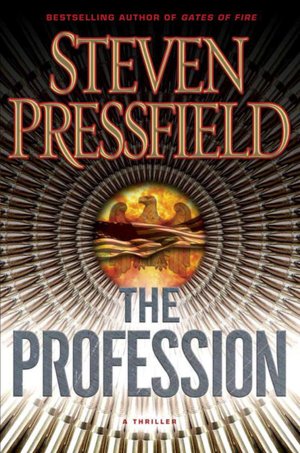 “The year is 2032. The third Iran-Iraq war is over; the 11/11 dirty bomb attack on the port of Long Beach, California is receding into memory; Saudi Arabia has recently quelled a coup; Russians and Turks are clashing in the Caspian Basin; Iranian armored units, supported by the satellite and drone power of their Chinese allies, have emerged from their enclaves in Tehran and are sweeping south attempting to recapture the resource rich territory that had been stolen from them, in their view, by Lukoil, BP, and ExxonMobil and their privately-funded armies. Everywhere military force is for hire.  Oil companies, multi-national corporations and banks employ powerful, cutting-edge mercenary armies to control global chaos and protect their riches.  Even nation states enlist mercenary forces to suppress internal insurrections, hunt terrorists, and do the black bag jobs necessary to maintain the new New World Order.”

Staff Review:
Excellent read. Pressfield generally writes historical fiction but this one is a departure from that. While it reads like historical fiction, it is set in 2030s. It tells the story of a mercenary army (corporate and government-funded) in the Middle East which has become so large and powerful (and is commanded by a very charismatic figure) that it is on the verge of taking over valuable oil fields and creating a new nation. It is a fast paced and thoughtful book with lots of interesting marginal details about the future of the news industry and the role of the Internet in private lives and on the battlefield.

Check the catalog for The Profession