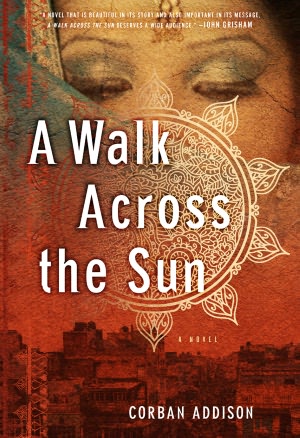 “When a tsunami rages through their coastal town in India, 17-year-old Ahalya Ghai and her 15-year-old sister Sita are left orphaned and homeless. With almost everyone they know suddenly erased from the face of the earth, the girls set out for the convent where they attend school. They are abducted almost immediately and sold to a Mumbai brothel owner, beginning a hellish descent into the bowels of the sex trade.

Halfway across the world, Washington, D.C., attorney Thomas Clarke faces his own personal and professional crisis-and makes the fateful decision to pursue a pro bono sabbatical working in India for an NGO that prosecutes the subcontinent’s human traffickers. There, his conscience awakens as he sees firsthand the horrors of the trade in human flesh, and the corrupt judicial system that fosters it. Learning of the fate of Ahalya and Sita, Clarke makes it his personal mission to rescue them, setting the stage for a riveting showdown with an international network of ruthless criminals.”

To just say that I highly recommend this book is not enough. A Walk Across the Sun is not just words on a page or an interesting story. It is an experience the reader will not forget. Even the title and cover speak of something profound within the book. This work of fiction has real purpose. The author’s intent firstly, was to bring the subject of international human trafficking to readers in a way that will keep them both involved in the action of the story while not losing sight of the facts. In order to in his words “make it personal to his readers” Addison actually visited Kamathipura, one of India’s largest red light districts.

His presentation of the subject is so powerful and original. In creating a fast pace thriller rescue mission spanning three continents this book will appeal to readers of fiction everywhere. Addison’s use of written imagery is intense and vivid. The reader is enveloped in both the beauty of India and its culture, and the excruciating despair of the Brothels of Mumbai. The characters are so genuine.  I felt the same despair and frustration that the girls and Thomas experienced with each failed rescue attempt. That said; don’t be turned off by the bleak theme.  Without giving away too much rest assured that the book has a redeeming if not sugar coated conclusion. There is no doubt that this is a book worth reading. It will change your way of seeing the world

Note: I thought it interesting to note that John Grisham remarked that he is often approached by authors hoping to be published asking him to endorse their book. He has declined every time until he read A Walk Across the Sun

For more information the campaign to stop human trafficking check out the International Justice Mission at www.ijm.org

Check the catalog for the availability of A Walk Across the Sun.

2 thoughts on “A Walk Across the Sun ~ Corban Addison”