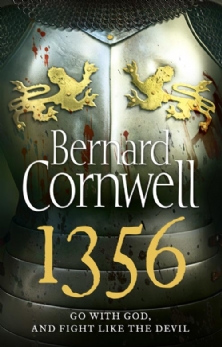 Set in the early years of the Hundred Years War, 1356 sees the resurrection of Cornwell’s irascible archer, Thomas of Hookton. Thomas is given a quest to find La Malice, the oddly-shaped sword believed to have been used by Saint Peter to lop off the ear of one of the men who arrested Jesus Christ. The French, English and Roman Catholic clergy all believe that it is a relic of awesome power whose possession will guarantee victory.  Hookton, known as Le Batard, bluffs and fights his way through the burning and ravaged French countryside – sometimes the hunter, sometimes the hunted – and ends up playing a key role in the Battle of Poitiers. Along the way we find a compelling assortment of criminals, power-abusing churchmen and heroes with varying and shifting loyalties and agendas. The actual battle itself is classic Cornwell: descriptive and informative but never boring. One can almost smell the stink of sour wine on the breath of combatants as they charge and clash. No one, except perhaps Steven Pressfield, can weave a battle tale as deftly as Cornwell. 1356 is first rate historical fiction and a most satisfying read.

Check the Catalog for availability