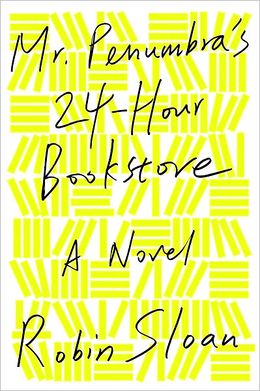 Clay Jannon is an out of work graphic designer in Silicon Valley. In attempt to concentrate on his job search and not get sidetracked on the internet, Clay prints out job postings and walks the streets of San Francisco. On one of his excursions, he ends up in front of Mr. Penumbra’s 24 Hour Bookstore where he sees a help wanted sign in the window. After a very brief interview, he’s offered the job. Clay works the overnight shift and he soon finds out that there are two parts to the bookstore. The front of the store is a regular used bookstore, while the back of the store is more of a lending library. Clay must climb up incredibly steep ladders to get books for customers who come in at all hours. Each of the books in the back of the store is in code and Clay is required to record the name and “state of mind” of the borrower.

In an effort to attract more customers to the store, Clay inadvertently runs into a young woman who works at Google. Clay and Cat join forces to see if they can figure out what is really going on at the bookstore. Together, they uncover a secret society and test the limits of the behemoth that is Google.

Sloan’s novel has cult classic written all over it. The cover glows in the dark. Need I say more? Clay is a likeable everyman/slacker and unlikely hero of one pretty quirky bookstore. Folks who read for character might enjoy the fact that Clay surrounds himself with interesting folks.  His best friend owns a start up that supplies software to video game companies and his roommate Matt works at Industrial Light and Magic.  In his spare time, Matt takes over the living room of their apartment with his miniature world “Mattropolis”. The celebration of technology and moveable type  in the same book was a real treat.  I found the tech/geek side of myself warring with the book nerd side of myself. Fans of Umberto Eco and Carlos Ruiz Zafon may relish this novel gem.