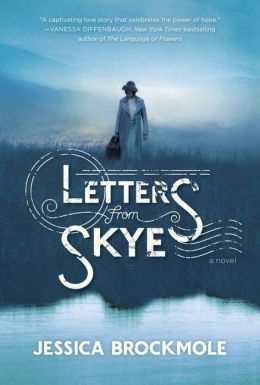 Jessica Brockmole’s debut novel written in letters sparkles from the start. Don’t let the format put you off. If you are thinking of long-winded letters from the 18th Century, think again. These letters move the pace along in this historical novel often leaving the reader hanging and highlighting the desperation of the time period. Brockmole creates parallel narratives one starting in 1912 and the other during the second World War.

In the earlier time period we meet Elspeth Dunn, a young poet who is isolated on the island of Skye. A plucky, young, American college student writes a fan letter to Elspeth, her very first. The unlikely pair strike up a friendship despite the ocean that divides them. Both writers are witty and charming and it was easy to fall in love with both.

The second narrative follows Elspeth’s daughter Margaret who has been escorting children into the country to escape the bombings in World War II. When she visits her mother in Edinburgh, she finds one of her mother’s letters. A bomb hits Elspeth’s house and Elspeth disappears.  Margaret is in love with a soldier and writes to him about her efforts to find Elspeth and to piece together her story and to find out the truth about her own father. Margaret calls upon what little family she can find and starts up a correspondence with her curmudgeonly, long lost uncle.

Letters from Skye grabbed me from the first and I didn’t want to put it down. Brockmole doesn’t bog the reader down with details, but still manages to bring her settings to life. The characters are brave and headstrong, but also endearing.  This love story that spans to World Wars is a great read for some of our rainy summer days.

Check the NOBLE catalog for availability