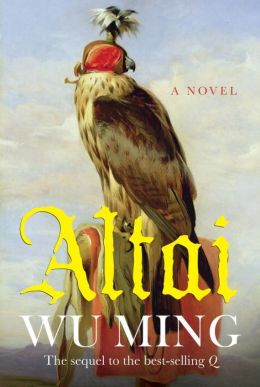 I had actually been waiting for this book to be translated into English for some time. It was written by a Italian writers collective Wu Ming (aka Luther Blisett). Altai is a loose sequel to their book Q published in 1999. Because it is a translation the tone of the writing can be jarring. What was probably written of an older prose style in the Italian was translated into modern English. The story itself opens with the main character Emmanuele De Zante agent for the Venetian secret service investigating a fire in the state run armory in 1569. However the reader doesn’t stay in Venice for long. A long kept secret forces De Zante to flee across the Mediterranean where he falls in with the very people he used to hunt.

The real strength of this book is the scenery. The authors write beautiful descriptions of 16th century Venice, Thessalonica, Istanbul. A person who loves armchair travel would enjoy the sense of place the authors impart the reader. Although I didn’t always find the main character believable (De Zante goes from being a loyal servant of Venice to one of its enemies a little too quickly to be believed) the secondary characters are very compelling. I think this is partly because the secondary characters are mostly carry overs from Q and are much better developed.