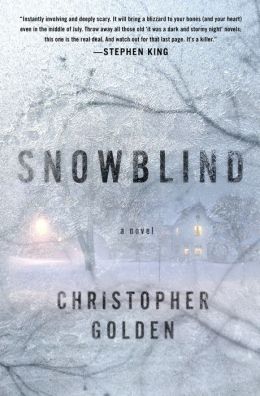 Christopher Golden hasn’t written a horror novel for quite awhile, but he certainly hasn’t lost the knack for it. If you haven’t read Snowbound yet, don’t go into it expecting immediate action. This is the type of horror story that slowly and suspensefully builds to a crescendo. It starts with what happened during a monstrous blizzard twelve years ago which resulted in several mysterious deaths and disappearances. It leaves no doubt that something supernatural was at play here, but it doesn’t go into a huge amount of detail. Instead it jumps to the present and what is going on with the survivors in Coventry MA as they anxiously await another monster blizzard which is forecasted. Golden goes into how their lives have changed since the first storm, usually not for the better. Actually the only reason why I’m not giving this 5 stars is because it doesn’t make sense to me that after what happened only one survivor actually has the sense to leave town, although she does come back to try to save her friends when she finds out it’s going to happen again. Instead, the rest of them stay, nervously awaiting every snowstorm. Aside from that though, I loved the development of the characters, and also the suspenseful build up to the climax. I would recommend this to fans of Stephen King. Especially ones who love his earlier works.