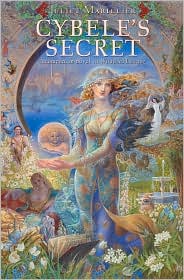 For Paula, accompanying her merchant father on a trading voyage to Istanbul is a dream come true. They have come to this city of trade on a special mission to purchase a most rare artifact—a gift from the ancient goddess, Cybele, to her followers. It’s the only remnant of a lost, pagan cult.

But no sooner have they arrived when it becomes clear they may be playing at a dangerous game. A colleague and friend of Paula’s father is found murdered. There are rumors of Cybele’s cult reviving within the very walls of Istanbul. And most telling of all, signs have begun to appear to Paula, urging her to unlock Cybele’s secret.

Meanwhile, Paula doesn’t know who she can trust in Istanbul, and finds herself drawn to two very different men. As time begins to run out, Paula realizes they may all be tied up in the destiny of Cybele’s Gift, and she must solve the puzzle before unknown but deadly enemies catch up to her. . .

Cybele’s Secret may have been my introduction to Juliet Marillier, but I can assure you, it won’t be a passing acquaintance. I immediately fell into a world of myth and intrigue, of Turkish culture and history, and into the quest that young Paula must undertake to save those she loves. I suppose it would be safe to say that I was, quite frankly, enchanted by this fantasy novel.

As I just mentioned, this book has so much to offer, everything from romance to adventure, and while it is being marketed to young adults it can – and should – be appreciated by a much larger audience. This particular title is a companion novel to Wildwood Dancing, though you need not read one to read the other, and I sincerely hope that Ms. Marillier has plans to revisit the characters she created and the world of magic she opened to all of us.