If you are in the area Hannah Tinti will be reading and signing The Good Thief on Sunday,  October 26 at 2pm. 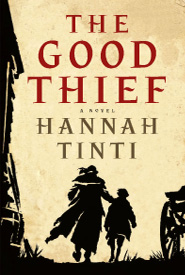 The accolades for this book are so glowing and so many. Hannah Tinti has created a world at once familier and strange. Other reviewers have justifiably compared her to Charles Dickens and Robert Louis Stevenson. I think she is a wonderful combination of the two. Her novel has the adventure and timing of Stevenson combined with the poverty, shifty characters and dark sense of place found in Dickens.  Ren, an orphan with a missing hand, longs for a family when along comes Benjamin Nab. He claims to be his long lost brother. He weaves a tale so fabulous that he convinces the orphanage to let him take Ren. But Benjamin Nab isn’t who he claims to be. Along with his friend Tom, they embark on one scheme after another to make ends meet until their luck runs out in a town called North Umbrage. Tinti knows how to combine great characters with a fabulous story. The unusual is the norm in The Good Thief. It is hard to say that thieves, drunks and murderers are endearing, but Tinti pulls off that magic. Benjamin Nab has become one of my favorite characters. In his words, the boundaries of the truth become fluid. Tinti is an amazing storyteller and the end of this book unravelled so quickly I could hardly believe it. There were some moments in the book that were wonderfully impossible and what she gives us more than anything is hope.